You are here: Home / Sports / Vikings back to work after bye week 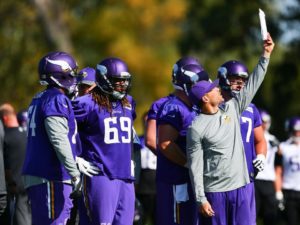 As welcomed as the bye week is in the NFL for the rare in-season opportunity for healing and rest, that hole in the schedule can be a momentum-halter too.

The Minnesota Vikings returned from their brief vacation with the best antidote on the market for post-break complacency: an unbeaten record.

”Man, this might have been one of the best practices that I’ve ever had in the NFL coming off a bye,” cornerback Captain Munnerlyn said. ”Normally you feel a little sluggish, guys are not moving around, and you forget little things and make crazy mistakes. But today we were locked in, focused and flying around, having fun.”

Of course, sharp workouts during the week don’t mean automatic victories. An unlucky bounce in the game at Philadelphia on Sunday is all it would take to snap that turnover-free streak by the offense and bring the perfect record crashing down with it.

”Everybody’s going to want to knock the undefeated team off. We’re undefeated, so we know that’s going to happen,” Munnerlyn said. ”We have to play a little tougher, and teams are going to come at us a little bit more.”

Coach Mike Zimmer has rarely missed an opportunity to remind his players of the imprudence of becoming comfortable. So there was no mystery whether his post-practice message to the team Monday included an exhortation to continue striving for improvement. To reporters, Zimmer cited more consistent fulfillment of pass coverage assignments by the defense and eliminating lost-yardage plays by the offense. 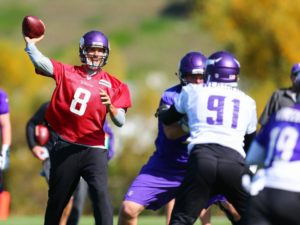 ”I talked to them about making sure when you come back that you don’t come out here and pull muscles, get some workouts in, watch some tape,” Zimmer said. ”They did a good job in meetings today. For the most part, they did a good job in practice as far as being on point with things. There were a couple things I had to mention to them that we need to do better today, but I think overall, these guys are pretty focused most of the time.”

As inconsequential as an October practice will be in the scope of their 2016 season, the Vikings showed their coach at least another sign of their potential to be one of those special teams that fit and work together just right.

”Today was important to see these guys come out here and where they were,” Zimmer said. ”My first year, when I’d give them some time off they’d come back and forget everything they had learned. Today it wasn’t like that.”

The only known negative development during the week was the arrest of practice squad offensive lineman Isame Faciane on suspicion of drunken driving. Faciane wasn’t on the field Monday, and Zimmer made it sound like he won’t be there again, at least in Minnesota.

”It’s disappointing,” Zimmer said, ”and that’s one of the things that I’m trying to get rid of around here, making sure that our fans are being represented in the right way. It was stupid, and we’ll see.”

In brighter news, quarterback Taylor Heinicke has been cleared to return to practice on Wednesday. He’s been on the non-football injury reserve list since the start of training camp, the result of severed tendons in his left foot from an ill-fated kick of a glass door attempting to help a locked-out friend enter his apartment.

Once he takes the field, the Vikings will have up to three weeks to decide whether to add him to the active roster as a third quarterback this season.