You are here: Home / Sports / Vikings Defense Has Been Dominant 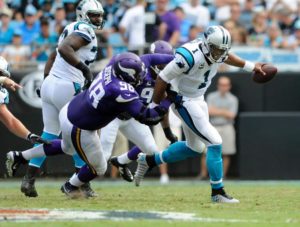 The defense that Mike Zimmer has deliberately built since he became Minnesota’s head coach has been gradually ascending into one of the league’s best.

The Vikings have sure begun this season with a bang. For the second straight game, they turned an NFL MVP into a flustered, ineffective quarterback.

The defense racked up eight sacks and three interceptions of Carolina’s Cam Newton in the 22-10 victory over the defending NFC champion Panthers on Sunday. It was a resounding response by the Vikings (3-0) after having to put running back Adrian Peterson and left tackle Matt Kalil on injured reserve earlier in the week.

”We feel like we can be one of the best ever to wear purple. That’s not taking away from the guys who wore purple before us, but we hold ourselves to that standard,” defensive end Brian Robison said.

The eight sacks were the most by the Vikings in a road game since Dec. 28, 2003, at Arizona. Newton, the most valuable player in 2015, fared even worse than Green Bay’s Aaron Rodgers, the award winner in 2014, did the week before when the Vikings beat the Packers 17-14.

The Vikings lead the league with a plus-8 turnover margin. They have a league-high 15 sacks for a whopping 116 yards. Philadelphia is the next closest team with a total of 72 sack yards.

The engine of the group is in a front four that’s one of the deepest in the league, led by Everson Griffen, who had three sacks at Carolina. The heart rests with young linebackers Anthony Barr and Eric Kendricks, the hand-picked high draft picks who run Zimmer’s patented Double-A-gap blitz scheme.

There are so many athletic, versatile players throughout the defensive lineup that the Vikings are able to apply a pass rush from all corners of the field, making up for it with sound coverage beneath it. Rodgers, who has one of the keenest senses of pocket awareness in the NFL, said he didn’t see the pressure on any of the three times he fumbled last week. Newton sounded even more baffled. 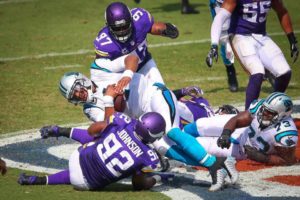 ”These guys are all pretty good players,” Zimmer said. ”It’s hard to really confuse guys anymore. We try to do our best and, really, I know people are saying that it’s me against the guy or that guy. We’ve got good players. These guys execute the things we try to get them to do. It’s a players’ game, and these guys have been executing and doing a nice job. I can’t go out there and cover a guy or rush a guy or anything like that. It really has nothing to do with me.”

Here are three highlights from the game that displayed the defense’s prowess and proved pivotal in the outcome:

Trailing 10-0 late in the first quarter, on a second-and-9 play for Carolina at the 5-yard line, the Vikings rushed only four players and dropped seven into coverage. The Panthers protected Newton with seven blockers. Danielle Hunter still worked his way into the end zone to take down Newton for a safety.

Hunter knocked over Michael Oher at the line of scrimmage, hurdled over the fallen left tackle and slid past a push by left guard Andrew Norwell to reach the quarterback. This was a prime example not only of the strength and depth of Minnesota’s front four, since Hunter isn’t a starter in the base defense, but of the quality of coverage in the secondary, too. Without anybody to throw to, Newton held the ball too long.

Late in the third quarter, with the Vikings leading 16-10, the Panthers ran a third-and-11 play from their 33. Barr and Kendricks hinted at a blitz with the Double-A-gap look, but both of them dropped into coverage. Even Robison, who often lines up at defensive tackle in the nickel package in passing situations, hung back in the middle of the field as a spy on Newton, and with only three rushers the Vikings still applied pressure with Griffen and Hunter.

Newton threw toward the sideline, where Terence Newman jumped in front of Ted Ginn for the interception that set up a field goal by Blair Walsh.

With less than four minutes left in the game, after Walsh’s second field goal had given the Vikings a 12-point lead, the Panthers had a first-and-10 play at the Minnesota 35. Zimmer sent six rushers, with Barr and Kendricks charging through the middle on a Double-A-gap blitz. Robison dropped in coverage, and safety Harrison Smith raced around the edge untouched for the sack.

The drive later ended with Tom Johnson’s interception of an under-pressure pass heaved by Newton and tipped at the line.