You are here: Home / Sports / Vikings defense leads the way

The Minnesota Vikings are 1-0 with Shaun Hill playing mistake-free in his first start since 2014. Now the Vikings must decide if they stick with the 36-year-old veteran or the man they traded for after Teddy Bridgewater’s season-ending injury.

Shaun Hill threw for 236 yards Sunday, but the Vikings needed their defense to force three turnovers, two returned for touchdowns, to beat the Tennessee Titans 26-15 in their season opener.

Zimmer said Hill did a good job, and Sam Bradford has been studying up as well.

”We always huddle and decide what to do,” Zimmer said of who starts their home opener against Green Bay. ”There are so many other things we have to fix right now. I can’t wait to get with the coaches.”

The Titans have issues too after blowing a 10-point lead by giving up 25 straight points.

”The turnovers were catastrophic,” Titans coach Mike Mularkey said of his first game since the interim tag was removed in January. ”I’ve never had a game where you have one turnover, but two for scores.”

Here are some things to know about the Vikings and Titans:

The NFL rushing leader last season started off the season just as he did a year ago by running for just 31 yards. But stopping the 2012 MVP was the biggest goal of the Tennessee defense, and the Titans swarmed him early and often. Peterson carried 19 times and couldn’t catch the two passes thrown at him. ”I’m just thankful that we were able to get the points that we were able to get offensively, and the defense came through for us and made some big plays,” Peterson said. ”They pretty much bailed us out.”

Hill only threw seven passes in three appearances last season for Minnesota, and he completed only two. Against Tennessee, Hill was 18 of 33 for 236 yards passing with Stefon Diggs catching seven passes for 103 yards. He helped the Vikings pick up 12 of their 15 first downs through the air, often finding Diggs, tight end Kyle Rudolph or Adam Thielen to keep drives alive. 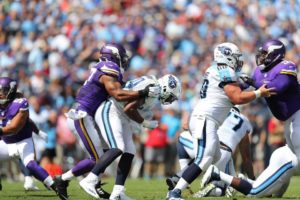 The Titans trailed only 12-10 when Eric Kendricks picked off a Marcus Mariota pass and ran it 77 yards for a touchdown. Tennessee went three-and-out on its next drive, then lost fumbles on each of its next two possessions. Mularkey said DeMarco Murray held on a bit too long as Mariota faked a handoff, resulting in a fumble Danielle Hunter picked up and ran 24 yards for a TD. Murray then lost the ball on the drive for three turnovers within seven minutes.

Blair Walsh finished kicking four field goals, including a long of 50 yards. But the Vikings kicker started this season in a similar fashion to how last season ended in hooking a field goal wide left. Walsh shanked a 27-yarder in their 10-9 playoff loss to Seattle when the laces weren’t out. Against the Titans, he was wide left on a 37-yarder and missed two attempts at a 56-yard field goal before halftime with the ball coming nowhere near the uprights. He also missed an extra point. ”He’s going to have to kick them through,” Zimmer said. ”He’s our kicker so there’s no question about that, but he needs to kick better.”

The Titans had everything going in the first half for a great start to a season with a new general manager and 23 new players on the roster. They took a 10-0 lead into halftime after Murray jumped into the air and dove over a defender to finish off a 6-yard TD catch. They didn’t score again until Mariota found Murray again for a 4-yard TD pass inside the final minute. Now Tennessee is 2-15 since the start of the 2014 season on its home field, with both wins coming against Jacksonville.