You are here: Home / Sports / Vikings defensive tackle making name for himself in Minnesota 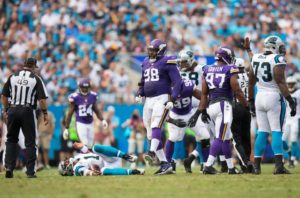 Linval Joseph had solidified himself as one of the league’s best run stoppers, entering his seventh year in the NFL, but the Minnesota Vikings still saw room for their big man in the middle to play even better.

The typical hunker-down mentality of the nose tackle, whose ideal role is to push back the point of attack, plug the holes in the line and occupy multiple blockers, doesn’t automatically translate to aggressively pressuring the quarterback when he’s dropped back in the pocket.

”He loves playing the run, but if he could ever develop that mentality of when it’s time to pass rush,” coach Mike Zimmer said during training camp, ”I think he could go to the next level.”

Three games into this season, Joseph has taken that step. He already has three sacks, closing in on his career high of four and contributing to Minnesota’s league-leading total of 25. He’s fourth on the team with 10 quarterback hurries.

”Just picking up where I left off,” Joseph said, trying to downplay his pass-rush improvement, ”and everything’s falling into the right place for me right now.”

Joseph will find himself facing some of his former teammates on Monday night when the Vikings (3-0) host the New York Giants (2-1), the team that drafted him out of East Carolina in the second round in 2010.

”Bygones are bygones,” he said. ”They’re another team. They’re on schedule, and we need to win.”

When he signed a five-year contract in 2014 worth as much as $31.25 million with $12.5 million guaranteed, Joseph left behind plenty of admirers in New York.

”One of the hardest-working guys. Always in the weight room. Probably one of the strongest guys in the NFL,” Giants left guard Justin Pugh said. ”Definitely got our work cut out for us.”

Joseph is listed on the light side at 6-foot-4 and 329 pounds. There’s hardly a player in the locker room who will recite the company line more consistently, whenever the subjects of personal accolades or long-term team success are raised by media.

”We really don’t care about what people say about us, to be honest with you,” Joseph said. ”We just want to go out there and do our best.”

Joseph needed time to adjust to Zimmer’s system in his first year with the Vikings in 2014. His first training camp was frighteningly interrupted by a calf injury caused by a stray bullet at a nightclub shooting a few hours after a preseason game. Last year, Joseph made significant strides, but he missed four games because of a painful turf toe injury.

”He’s playing at the level that we thought he was capable of and has played at before, so nobody in here is surprised,” linebacker Chad Greenway said. ”I think he’s obviously a complete monster in the middle, and you’ve got to block him with multiple people, and that’s so great for us linebackers.”

The Vikings aren’t even to the quarter mark of the schedule, of course, but the defense appears to be in full stride in Zimmer’s third season. The Vikings also lead the league with a plus-8 turnover margin.

”Three years working together, I think that helps. Just sticking to the repetition, day in and day out, working with each other, playing with each other, just being around each other,” Joseph said. ”If we just keep playing at a high level and everybody stays healthy, the sky’s the limit.”

The 4-3 scheme, well-known for the double A-gap blitzes that Zimmer calls, or bluffs, for linebackers Anthony Barr and Eric Kendricks, is predicated on a synchronized pass rush along the defensive line. If one player freelances, even if he believes he can complete a sack, the plan won’t work. Individual sack totals, then, can be lower because the rush in Zimmer’s system comes from so many different places.

”I think we’re all having fun and enjoying playing with one another,” safety Harrison Smith said. ”That’s not just the makeup of the defense, but of the team.”