EDEN PRAIRIE, Minn. — The biggest surprise on cutdown day for the
Minnesota Vikings was the release of left guard Alex Boone, who
less than 18 months ago was a prized free-agent signing at $26.8
million over four years.

In hindsight, it shouldn’t have come as a surprise.

About two weeks ago, when head coach Mike Zimmer was asked about
the battle at center between Nick Easton and Pat Elflein, Zimmer
said, “Who knows? One of them could end up at guard.”

This came after Boone had missed the second preseason game at
Seattle. Easton moved to left guard, allowing the rookie Elflein to
start at center. And the line played the best it played all
preseason. 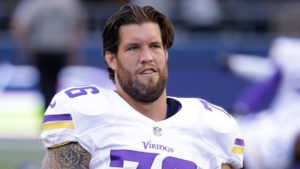 But the assumption was the Vikings wouldn’t pull the trigger and
dump Boone, leaving $3.4 million in dead cap space this season.

But this is how serious the team is about making sure they’ve got
the right five guys for their switch to a new zone blocking scheme.
Boone, who was brought in last year to be a power guy in front of
Adrian Peterson, struggled being the nimble side-to-side guy that’s
now required in Pat Shurmur’s version of the West Coast offense.

When the Vikings drafted running back Dalvin Cook in the second
round, they hailed his experience in a zone-blocking scheme.

“He came from a pretty advanced offensive system at Florida State,”
Shurmur said. “You saw principles of zone running, gap running, and
pass protection where he was involved. He was also involved in
route running. He has a pretty good foundation of what we’re going
to ask him to do, and I think that helps him.”

Well, it hurt Boone. And the Vikings pulled the trigger, knowing
that if they don’t get their line right, the whole season will
implode like it did during last year’s 3-8 slide to end the season. 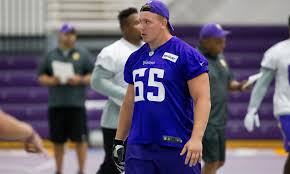 –Quarterback Teddy Bridgewater, as expected, was moved to the
regular-season PUP list. He missed all of last season after
dislocating and tearing multiple ligaments in his left knee. He’s
eligible to come off PUP after Week 6, but isn’t expected to play
this season.

Zimmer has said Bridgewater will begin practicing when he’s “able
to protect himself and make the moves on the field that’s required
of his position.”

Obviously, if Sam Bradford plays well, the team will have no need
to activate Bridgewater. If they keep him on PUP the whole season,
they’re guaranteed to have his contract tolled to 2018, meaning
they’d have his rights for another season at $1.345 million.

There is some debate as to what happens with the contract if
Bridgewater is activated after six games. Wording in the CBA
indicates that the final year of a contract tolls if a player is
still on PUP as of the sixth game. The players’ union would likely
challenge that considering there are past cases in which it was
interpreted that a player had to be on PUP all year.

If Bridgewater is able to practice and the team doesn’t activate
him, Bridgewater and the union likely will challenge the team’s
motives for not activating him.

Meanwhile, the Vikings decided to go with only two quarterbacks on
cutdown day. They waived Taylor Heinicke, a third-year guy with no
regular-season experience, and rookie Mitch Leidner, the former
University of Minnesota quarterback who was signed recently when
Heinicke dealt with an abdominal strain.

Heinicke, who was waived injured and placed on reserve/injured
Sunday after clearing waivers, suffered a concussion in the
preseason finale. He ran well in the preseason, struggled throwing
the ball and with his decision-making.

–Linebacker Eric Wilson was one of three undrafted rookies to make
the final roster. The 6-foot-1, 230-pounder will become a standout
special teamer. He has the compact build, the quickness and the
tackling ability to be a leader covering kicks and punts. The other
two undrafted rookies to make the team were DE Tashawn Bower, who
flashed exceptional pass rushing skills for a guy who wasn’t
drafted, and T Aviante Collins, a surprise winner of the backup
right tackle job.

–Linebacker Edmond Robinson, who went into training camp as a
promising third-year pro, lost his spot on the roster when he was
outplayed by other young linebackers, including rookie Ben Gedeon,
a fourth-round pick from Michigan. Gedeon and veteran Emmanuel
Lamur will handle the weak-side linebacker spot in the base
defense. That’s the job Chad Greenway was handling at the end of
his 11-year career. That spot plays about 30 percent of the
defensive snaps.

–Kicker Kai Forbath didn’t have the strongest leg in camp, but his
accuracy was enough to beat out Marshall Koehn. Koehn was the
better kickoff guy, and he nailed a 58-yard field goal with plenty
of room to spare in the third preseason game. But he has never
kicked in a regular-season game. His fate was officially sealed
when he duck-hooked a PAT wide left in the final preseason game.
The Vikings also went with experience over leg strength at punter,
where Ryan Quigley’s directional skills beat out Taylor Symmank’s
erratic power.

–Defensive tackle Sharrif Floyd continues in his comeback attempt,
but the Vikings aren’t hopeful. The former first-round draft pick
played only one game last season before having knee surgery. The
surgery was unsuccessful and Floyd suffered some nerve damage. He
was placed on the reserve/non-football injury list.

–Tackle T.J. Clemmings was quietly released on cutdown day. It was
the final bottoming out for a third-year pro who started 30 of 32
games in his first two seasons. Often seen as the primary example
of the Vikings’ ongoing weakness up front, the 2015 fourth-round
draft pick was forced into the starting lineup by injuries in 2015
and last year. He started every game at right tackle as a rookie
and bounced between right and left tackle when injuries destroyed
the line early on last year. He was claimed on waivers by the
Redskins. Also released was 2016 fourth-round pick Willie Beavers,
another tackle who didn’t pan out.

–Wide receiver Michael Floyd began serving his four-game
suspension for violating the league’s substance abuse policy. He
was arrested for DWI in December.

–Tight end Blake Bell was awarded to the Vikings as a waiver-wire
claim on Sunday. The 26 year old was a fourth-round pick of the
49ers in 2015. He’s a big target that should be able to help as a
blocker.

–Quartrback Kyle Sloter, an undrafted rookie from Northern
Colorado, was signed to the practice squad on Sunday. He was waived
by denver Saturday. The Vikings kept only two quarterbacks on the
active roster and also have Teddy Bridgewater on PUP for at least
the first six weeks.