You are here: Home / Sports / Vikings get defensive and move to 3-0 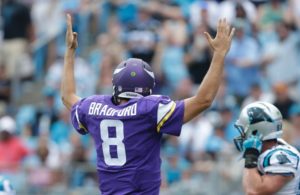 The Vikings (3-0) put the clamps on Cam Newton, intercepting the league’s reigning MVP three times and sacking him eight times, one of those resulting in a safety by Danielle Hunter.

The eight sacks were the second-most ever against Newton.

The Panthers had come in averaging 42 points per game in their last three home games, but could do little after bolting to a 10-0 lead. The Vikings held Carolina receivers Kelvin Benjamin and Devin Funchess without a catch.

Bradford improved to 2-0 as the Vikings starter, completing 18 of 28 passes for 171 yards. With Adrian Peterson injured, Matt Asiata and Jerick McKinnon combined for 70 yards rushing on 22 carries. Rudolph had seven catches for 70 yards, including a 15-yard TD catch to put the Vikings ahead for good in the early in the third quarter.

Outside the stadium about 100 people gathered before the game to stage a peaceful protest over the police shooting of a 43-year-old black man last week.

Carolina only led 10-8 at halftime despite outgaining the Vikings 205-34 in the first half and limiting Minnesota to two first downs.

Vikings: Asiata got the start at running back but McKinnon was more productive back with 45 yards on 16 carries.

Panthers: Cameron Artis-Payne started over Fozzy Whittaker with Jonathan Stewart (hamstring) out of the lineup and ran for 47 yards on 12 carries. Whittaker only got five carries and had 22 yards rushing after running for 100 yards last week against San Francisco.

SAFETY FIRST: Hunter beat Michael Oher to sack Newton in the end zone in the first quarter for Minnesota’s first safety since Jared Allen had one on Dec. 4, 2011. Hunter has 6 1/2 sacks in his last seven games. 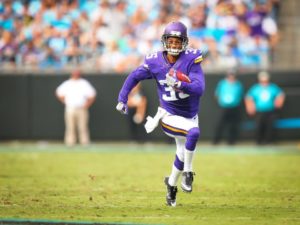 SHERELS RETURN: Sherels accounted for the Vikings only touchdown of the first half, taking an Andy Lee punt near midfield and cutting across the grain for a 54-yard touchdown return.

BENJAMIN’S BLUNDERS: Benjamin was called for two penalties in the first half, including a block in the back that nullified a 56-yard TD reception by Whittaker.