You are here: Home / Sports / Vikings happy with Sunday’s win in Carolina 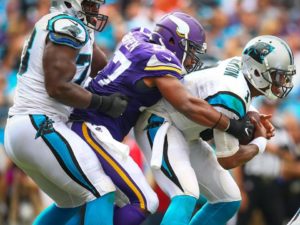 The Minnesota defensive end believes the Vikings have the talent to head in that same Super Bowl-bound direction.

”We are three games in and we have a long ways to go, but we can get there,” said Griffen. ”We can definitely get there.”

Everson and company harassed league MVP Cam Newton all game, registering eight sacks, three interceptions and a safety to help Minnesota beat the Carolina Panthers 22-10 Sunday and improve to 3-0 for the first time since Brett Favre was playing quarterback back in 2009.

The Vikings showed that last week’s win over the Green Bay Packers was no fluke, completely shutting down the NFL’s highest-scoring offense from a year ago.

With key injuries to Teddy Bridgewater, Adrian Peterson and Matt Kalil on offense, the defense is leading the way.

The Vikings have allowed just 43 combined points in three games against the Titans, Packers and Panthers. They have 15 sacks and nine turnovers.

So maybe, just maybe, the Purple People Eaters are back.

”We feel like we can be one of the best ever to wear purple; that’s not taking away from the guys who wore purple before us, but we hold ourselves to that standard,” Vikings defensive end Brian Robinson said. ”When we get the opportunity to get out there and stop the run and get after it, we do that.”

The Vikings normally bring a lot of blitzes and pressure, but on Sunday coach Mike Zimmer backed off some, relying more on his defensive backs to shutdown Carolina’s taller receivers.

The Vikings pitched a shutout after falling behind 10-0, holding wide receivers Kelvin Benjamin and Devin Funchess without a reception. Most of their sacks were coverage sacks.

Even Newton was baffled after the loss.

”I can’t tell you what happened,” Newton said. ”I can’t really pinpoint it right now.”

”I’ve said this all along: I think we can rush the quarterback,” Zimmer said. ”I think we’ve got guys who can rush. I played a little bit more coverage today than I have in the past because some of their receivers are big. But once we were able to stop the run, it was a lot easier to do that. Because we played the run good, we were able to do that and it allowed the guys to get after the quarterback.”

Linebacker Chad Greenway said the Vikings have a mentality that he’s not seen before in previous teams.

”We have individuals who are playing really well and getting great stats, but nobody’s mentality is that here,” Greenway said. ”That’s what makes it truly great, one you can enjoy as a team. So many people were a part of this effort. Offensively, we were getting points in the second half, and defensively we stand up when we have to.”

Zimmer says the Vikings aren’t surprised by their success.

”They believe that they can win in any situation,” Zimmer said. ”They work real hard, they study real hard, they play together as a team. When a guy messes up, he takes ownership of it. All these games, as we continue to go forward, they’ll continue to build confidence.”