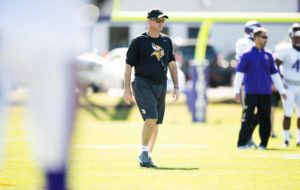 He’s certainly not going to tell the media whether he’s sticking with Shaun Hill or turning to newcomer Sam Bradford. And he might not even tell his own team.

That’s how deep Zimmer is willing to take the gamesmanship for this early NFC North showdown.

“I did last week. I don’t know if I will this week or not because it started leaking,” Zimmer said on Wednesday. “Usually I like to inform the team of everything that’s going on here and what I’m thinking, but I was a little disappointed that some of the things go out. We’ll just see how it goes. I may talk to them. I don’t know. Maybe I will.”

Teddy Bridgewater helped the Vikings end the Packers’ five-year reign atop the NFC North last season. With Bridgewater out for the season with a training-camp knee injury, Zimmer decided to start Hill last week. The Vikings won, but Hill had little to do with the success. The defense scored a pair of touchdowns in a 25-16 win at Tennessee.

Hill posted a passer rating of 77.3, which is good for 23rd in the league, and the offense enters the week ranked 26th in total yardage. The alternative is Bradford, who the Vikings acquired in the wake of the Bridgewater injury by sending first- and fourth-round picks to Philadelphia. 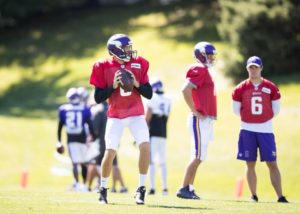 Bradford hasn’t lived up to expectations after being the first overall pick of the 2010 draft, posting a 25-37-1 record and career passer rating of 81.0. But he’s got a big-time arm that should fit nicely in offensive coordinator Norv Turner’s scheme. The question is, could Bradford operate that scheme at a winning level, considering that Sunday will mark his 14th day with the team?

“A lot of it is terminology,” Zimmer said, “and you start getting in motions and shifts, checks at the line of scrimmage. There’s quite a few things. Really, when you think about it, you have to learn the snap count, you have to learn the huddle procedure, how the calls come in, the way you call it. There’s so many things for someone that hasn’t been in our offensive system, it’s very difficult.”

Packers coach Mike McCarthy expects Bradford to get the call, though his team is preparing for both quarterbacks. Either way, he knows the starting point of beating the Vikings is slowing running back Adrian Peterson.

“I think it’s part of your personnel evaluation. It’s part of your scheme evaluation,” McCarthy said of the quarterback uncertainty. “You tilt toward certain schemes with one quarterback, as opposed to another. Those are the questions you ask through the game-planning process, but the fact of the matter is it’s going to start with giving the ball to Adrian Peterson. Every time we play the Vikings, that’s the focal point of our defense.”

From Minnesota’s direction, the defensive focal point will be controlling Packers quarterback Aaron Rodgers. They did so in the two games last season, holding him to a sub-90 passer rating in both games, including a Week 17 win at Lambeau Field that won the division.

The Vikings kept Titans quarterback Marcus Mariota under wraps in Week 1 by keeping him in the pocket. Keeping Rodgers in the pocket and preventing him from making big plays while on the move will be key on Sunday. 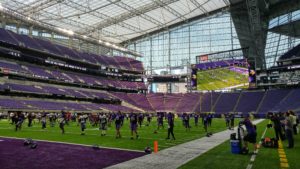 This is a huge early-season game, especially from Minnesota’s perspective, with the Vikings opening the doors on U.S. Bank Stadium. Minnesota played 32 seasons in the Metrodome and, after a two-year outdoor hiatus at the University of Minnesota’s TCF Bank Stadium, the Vikings are headed back to the great indoors. Their .615 winning percentage in dome games is tops in NFL history.

“The stadium is amazing,” Peterson said. “It’s going to be loud. You know, going on 10 years I’ve played in Green Bay, at home it always seems like it was kind of even, you know? Wisconsin, they come down and they pack the stadium as well.

“It kind of reminds me of the Red River Rivalry — half Texas and half Oklahoma. That’s what it feels like when you guys come here. I don’t know if there’s really going to be that big of an advantage outside of us playing at home.”