You are here: Home / Sports / Vikings injury situation gets worse up front 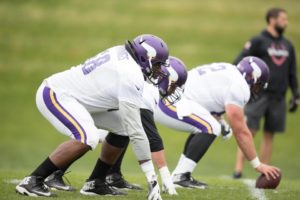 Minnesota’s struggling offensive line has been handed another setback, with an upcoming absence for left guard Alex Boone.

The Vikings ruled Boone and middle linebacker Eric Kendricks out of their game against Detroit because of concussions that kept both of them out of practice all week. Boone was also listed on the injury report with shoulder and knee issues. This will be the first absence of the season for each player when the Vikings (5-2) host the Lions (4-4) on Sunday.

Jeremiah Sirles will start in Boone’s place, leaving rookie Willie Beavers and Nick Easton as the only available backups. That’s because backup guard Zac Kerin was also ruled out on Friday to face the Lions because of a hand injury, further depleting a front five already missing original starting tackles Matt Kalil and Andre Smith. Kalil (hip) and Smith (triceps) are both on injured reserve.

Both pass protection and run blocking have been significant problems for the Vikings, particularly in the last two games after the team’s bye week. Sam Bradford was sacked 11 times over those losses to Philadelphia and Chicago, and for the season the Vikings have allowed 51 quarterback hits, tied for seventh most in the NFL. Boone, in his first year with Minnesota after leaving San Francisco to sign as a free agent, has been one of the team’s most consistent linemen.

The loss of Kendricks will be felt, too, especially with the receiving threat posed by Lions running back Theo Riddick. Kendricks has seven pass breakups this season, tied for the second most among non-defensive backs in the league. He’ll be replaced by Audie Cole in the base defense, and outside linebacker Chad Greenway will remain on the field in the nickel package rather than coming out for cornerback Captain Munnerlyn. 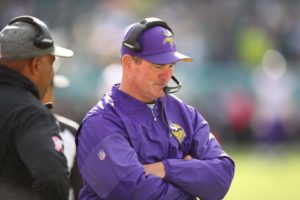 ”He’s an 11-year vet. I feel comfortable with everything. Chad’s a great player,” coach Mike Zimmer said. ”He’s always prepared and ready to go. You know if he gets the opportunity to play some more plays, I know he’ll be excited.”

Two other starters who missed the game against the Bears because of sprained ankles, safety Andrew Sendejo and running back Jerick McKinnon, were limited participants in practice this week and listed as questionable to play against the Lions.

Defensive tackle Sharrif Floyd, who has been replaced in the starting lineup by Shamar Stephen, was also declared out for the sixth straight game because of a knee injury that required surgery.

The only player ruled out for the Lions this week was linebacker DeAndre Levy, who has not played since the season opener after hurting his quadriceps.