You are here: Home / Sports / Vikings are last unbeaten team in NFL

The Minnesota Vikings are the last undefeated team left in the NFL, just five weeks into this season.

Adam Thielen caught a touchdown pass to cap Minnesota’s opening drive and finished with a career-high 127 yards as the Vikings overmatched Brock Osweiler and the Houston Texans on their way to a 31-13 victory on Sunday .

”You want to get fast starts so we can be able to get out there and kind of pin our ears back,” said Brian Robison, who had two of the four sacks. ”They’re going to want to throw the ball, because they’re down and they need to get back in the game quick.” 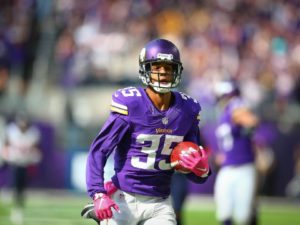 Marcus Sherels returned a punt 79 yards for a score and Cordarelle Patterson caught the other touchdown pass from Bradford, who went 22 for 30 for 271 yards and has yet to lose a fumble or throw an interception.

Osweiler finished 19 for 42 for 184 yards, one interception and a late touchdown pass to DeAndre Hopkins. The Texans (3-2) were denied on 12 of 13 third downs, unable or unwilling to do much other than dump off short passes. Lamar Miller only had eight carries for 20 yards during a dud of a performance by the Texans that felt a lot like the 27-0 loss at New England two weeks ago.

”Give credit where it’s due. The Vikings are a tremendous football team. They’re very well coached. They have great players,” Osweiler said. ”It seems like they have their scheme mastered, and they’re a hell of a football team.”

Here are the top takeaways from the game:

Cordarrelle Patterson disappeared from Minnesota’s offense after his rookie season, becoming a one-trick kickoff returner who entered the final year of his contract with an uncertain future.

Earning the trust of coach Mike Zimmer and his staff took a while, but through months of diligent work in practice his opportunity has returned. With leading receiver Stefon Diggs sidelined with a groin injury, Patterson had four catches for 39 yards and his first touchdown on offense since Oct. 19, 2014 . In the past two games, Patterson has nine receptions after totaling just four over the 19 games before that.

”He’s just one of those guys who has energy every day,” Bradford said. ”His smile out there at practice, he’s just fun to be around. I think the guys feed off of it.”

Miller had only eight carries for 20 yards for the Texans before being replaced late by Alfred Blue with the game well out of reach. Miller rushed at least 19 times in each of the first four games, but the 14-0 lead by the Vikings midway through the first quarter made him irrelevant after that.

Miller ran for 106 yards in his first game after signing a four-year, $26 million contract in the offseason, but hasn’t broken 100 since.

The Vikings line suffered another injury, as right guard Brandon Fusco left the game with a concussion, putting them down three starters.

”When we keep getting guys hurt, it’s always a concern,” Zimmer said. ”We’ll continue to figure things out.”

Zac Kerin filled in for Fusco, as the Vikings average just 2.6 yards per rush and Bradford was sacked twice behind struggling left tackle T.J. Clemmings, who whiffed on three blocks that led to tackles for loss.

The Texans still managed to hold the Vikings to 222 yards over their final nine possessions, though part of that was the conservative approach with the big lead.

”Defense is doing a good job,” O’Brien said. ”They’re going to be fine.”

HOOKED ON A THIELEN

Thielen, who like Sherels was raised in Minnesota and made the team as undrafted rookie after a tryout camp, has become much more than a special teams ace. He caught passes all over the field and finished with a career-high seven catches.  Thielen is from Detroit Lakes and played college football at Minnesota State-Mankato.

”He’s kind of the typical Vikings,” Zimmer said, ”guys that just go in and fight.”