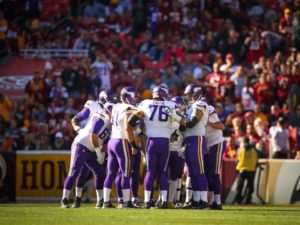 As if things were not already bad enough for the Minnesota Vikings, what with a four-game losing streak and a depleted offensive line, there sat Jake Long in front of a locker, head bowed, a pair of crutches by his side.

Long – signed last month after the Vikings put two tackles on injured reserve – was carted off the field after hurting his Achilles tendon on Minnesota’s final drive of a 26-20 loss to the Washington Redskins on Sunday, dropping a team that started 5-0 to 5-4 and making its present and future even bleaker.

Backup Jeremiah Sirles, seated to Long’s left, reached out and put a hand on his teammate’s shoulder, trying to comfort him.

”We’ll get back to the drawing board tomorrow,” Sirles said about what will happen to the offensive line now that Long is expected to miss the rest of the season, ”and see what the plan is going forward.”

Of immediate concern, in addition to how to replace Long after already having to account for injuries to left tackle Matt Kalil and right tackle Andre Smith, is next week’s game against the visiting Arizona Cardinals.

The Redskins (5-3-1), meanwhile, get to enjoy this back-and-forth victory – Washington led 14-0 a minute into the second quarter, trailed 20-14 at halftime, then scored the final 12 points – before facing yet another team whose season is spiraling out of control: They host the Green Bay Packers (4-5 after losing four of their past five games) next Sunday night.

Here is what else to know about Washington and Minnesota:

Undrafted rookie Robert Kelley is not letting go of the Redskins’ starting running back job. He climbed the depth chart in part because former starter Matt Jones had trouble holding onto the football, and Kelley – nickname: Fat Rob – heads into next week as the unquestioned No. 1 back. Kelley had 97 yards on 22 carries against Minnesota and hasn’t fumbled in the NFL, while third-down back Chris Thompson put the ball on the ground Sunday. Kelley watched the film of his first start, Oct. 30 against Cincinnati, saw cuts he missed and improved. ”I tried to make sure I didn’t make the same mistakes this game,” Kelley said. ”It worked out.” 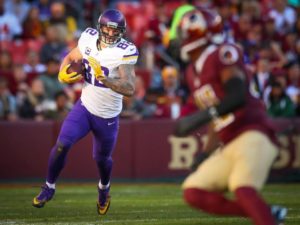 The Vikings can’t believe how much trouble they have in short-yardage situations and will prepare for Arizona knowing they failed to convert twice on third-and-1 against Washington. ”We’ve just got to do better. We went with big people. We went with small people. Didn’t get either one. That’s where our toughness needs to take over,” tight end Kyle Rudolph said. ”We can’t seem to get that 1 yard.”

Seven of the Redskins’ nine games this season were decided by one score; they’re 4-2-1 in those. Players said it’s a sign of resiliency; they wouldn’t mind a blowout moving forward, though. ”If we’re really going to be a good team,” defensive end Chris Baker said, ”we’ve got to stick our foot on (an opponent’s) throat from the beginning of the game until after the game.”

If Minnesota is going to turn its season back around, one key could be figuring out how to run the ball more – and run it better. Not having Peterson is a big deal, of course, but check out these numbers against the Redskins: 21 carries for 47 yards, a 2.2 average. Sam Bradford threw the ball nearly twice as many times (40) as he handed it off. ”It’s been tough the past couple weeks, but we’re going to stay committed to it. I know that we believe in the run game,” Bradford said. ”I still believe we’re best when we’re balanced.”

The Redskins’ offense settled for three field goals in four trips to the red zone against Minnesota – part of Washington’s season-long struggles when it gets close to the end zone. Plus, Kirk Cousins almost got intercepted at the goal line, but linebackers Eric Kendricks and Anthony Barr collided and the ball fell between them.