You are here: Home / Top Story / Vikings in national spotlight vs. NY Giants on MNF 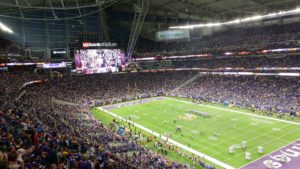 The Minnesota Vikings and New York Giants have kicked off at US Bank Stadium in downtown Minneapolis.

New York Giants running back Rashad Jennings and cornerback Eli Apple are inactive for the game on Monday night against the Minnesota Vikings.

Both were listed as questionable in the final injury report on Saturday. Jennings has an injured thumb while Apple has a bad hamstring.

For the Vikings, tight end David Morgan was out with a knee injury while receiver Jarius Wright was a healthy scratch for the third time in four games this season. Ronnie Hillman, who was signed two weeks ago after Adrian Peterson’s knee injury, was inactive for the second straight game.
###