You are here: Home / Sports / Vikings offense taking baby steps, but getting better 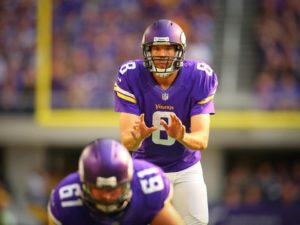 Needing a touchdown to win and down to 27 seconds left in regulation, the Minnesota Vikings sent their massive nose tackle in to clear a path for their most powerful running back on third-and-goal from the 1.

Linval Joseph lined up in the I-formation in front of Matt Asiata, and the blockers began to make space behind the left tackle.

That’s not where the play went, though, on one of many sharp calls by offensive coordinator Pat Shurmur in his first game at the controls.

Rhett Ellison had motioned across the formation before the snap, and Sam Bradford quickly stuck the ball in the backup tight end’s chest for a surprise burst into the end zone off the right end.

”Every week we try to add some new wrinkles, and we felt good about the play to Rhett,” Bradford said. ”It’s nice to get it called and executed the way we did.”

The lead was short-lived, because Minnesota’s defense uncharacteristically disintegrated after that in a 22-16 overtime defeat by the Detroit Lions on Sunday.

The Vikings (5-3) lost their third straight game for the first time since Oct. 19, 2014, in coach Mike Zimmer’s first year, but if there’s a positive development for them to take away at the midpoint of their season it’s the way the offense responded during a tumultuous week marked by the change in offensive coordinators .

Shurmur was promoted after Norv Turner abruptly resigned, citing a difference in philosophy with Zimmer about strategy.

To be sure, the playbook is the same as it was a week ago when Turner was at the helm. Bradford said the game plan for the Lions was ”fairly set in place” before Shurmur stepped in.

Coincidence or not, the display of sequence and style by the Vikings was a stark contrast from the sputtering performances at Philadelphia and Chicago the past two weeks. 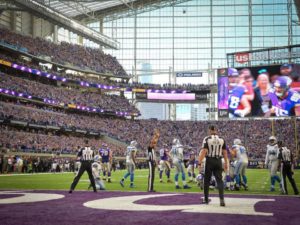 Favoring the screens, curls and other assortments of short low-risk passes from the West Coast scheme that Shurmur has run before, with a little bit of Chip Kelly’s fast-paced, no-huddle attack from the Eagles the past two years mixed in, the Vikings crossed the Detroit 30-yard line on six of nine possessions.

”I thought they had a good rhythm today with some of the things that they’ve done,” Zimmer said.

Behind the concerted effort to make quicker throws with shorter drops and minimize the pressure he faced against the Eagles and Bears, Bradford completed 31 of 40 passes for 273 yards, one touchdown and no turnovers.

After being sacked 11 times over the previous two games, he took only two in this one. Five different players ran the ball. Ten different players caught a pass, including Bradford himself on a pass batted at the line .

”Everybody is getting their piece of the pie,” said wide receiver Stefon Diggs, who had a career-high 13 catches for 80 yards.

As much culpability that lies with the soft defense down the stretch and the missed extra point and field goal by Blair Walsh, the offense sure wasn’t perfect. So Shurmur will still have plenty to work on in the second half of the season.

After an interception return by Chad Greenway gave them the ball at the Lions 18, the Vikings went backward 22 yards because of a false start by right tackle T.J. Clemmings, an illegal block by left guard Jeremiah Sirles, a 4-yard loss on a run by Ronnie Hillman and a devastating 9-yard sack to push them out of field goal range in the second quarter.

According to Fox Sports, the Vikings became the first team in five years to punt after starting a drive inside the 20-yard line. St. Louis did so in an Oct. 2, 2011, game against Washington.

Then there was the drive in the fourth quarter that reached the 6-yard line for third-and-2. Jerick McKinnon gained only 1 yard up the middle.

Then Asiata was stuffed up the middle for no gain to give the ball back to the Lions. Two weeks ago against the Eagles, just about the exact same sequence occurred.

”We’ve got to get that. That’s on us up front,” left tackle Jake Long said. ”That was a huge momentum shift.”