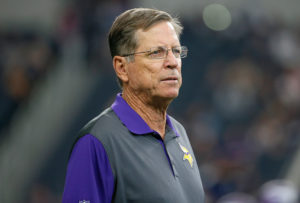 Coach Mike Zimmer’s voice cracked and his bottom lip quivered near the end of his news conference while discussing his relationship with Turner, whom he hired to run his offense after getting the job with the Vikings in 2014. Zimmer said the decision was made entirely by Turner, who was replaced by Pat Shurmur.

”Norv is a very, very good friend of mine. He has helped me tremendously in the three years that I’ve been here,” Zimmer said. ”He’s had an unbelievable career. He’s been, really, my right-hand man.”

The Vikings have scored only 10 points in each loss after a 5-0 start to the season, with the offensive line’s performance the primary concern. Quarterback Sam Bradford, who was sacked 11 times over the last two games, said he had no problem with the scheme and that the players felt responsible for Turner’s departure.

Turner released a statement through the Vikings, stating his ”tremendous respect” for Zimmer, the staff and the players and his desire to see them succeed.

”At this time I think it’s in the best interest of the team to step down,” said Turner, who told ESPN his decision stemmed from differing views with Zimmer about the offensive strategy.

Turner approached Zimmer at Vikings headquarters about 6:30 a.m. They had a long conversation about a variety of subjects.

Zimmer says he was surprised:

The Vikings (5-2) host the Lions on Sunday, still in first place in the NFC North despite their stumble out of the bye.

After two seasons of unremarkable production by the offense, Zimmer hired Tony Sparano as offensive line coach and Shurmur as tight ends coach. That put three former NFL head coaches on the offensive staff. Zimmer said he valued the diversity of perspectives and voices that brought to the strategizing on that side of the ball, but Shurmur’s arrival raised plenty of eyebrows around the league since he was overqualified for simply coaching tight ends. This is Shurmur’s 18th year in the NFL, including two seasons as Cleveland’s head coach and the last three years as Philadelphia’s offensive coordinator.

”Since Norv has been here I’ve given him almost 100 percent total free will in everything that they’ve done offensively,” Zimmer said. ”Obviously I’ll come in and make suggestions, but there really has not been a time where I’ve demanded everything from there.”

Last season, Shurmur had Bradford as his quarterback with the Eagles, and his input helped Vikings general manager Rick Spielman make the emergency trade for Bradford on Sept. 3 after Teddy Bridgewater was hurt. Shurmur was also Bradford’s offensive coordinator in 2010, the quarterback’s rookie year with St. Louis.

Turner has been a head coach in the NFL for 15 years. This was his 10th season as an offensive coordinator in the league. The 64-year-old has been with nine different NFL teams. Turner’s son, Scott, remains Minnesota’s quarterbacks coach, and the rest of the staff remains intact.