You are here: Home / Sports / Vikings at Panthers tomorrow 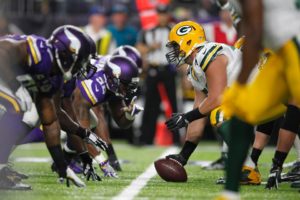 Welcome back to the big stage, Jerick McKinnon and Fozzy Whittaker.

Oh, and Matt Asiata and Cameron Artis-Payne, get ready to carry the football, too.

The Vikings and Panthers will be counting on their backup running backs to have a ”next man up” mentality when they meet Sunday in Charlotte, a city that was placed under a state of emergency due to the violent protests stemming from a police shooting last week.

Both teams lost their ”featured backs” last week to injury – Minnesota’s Adrian Peterson underwent surgery to repair a torn meniscus, while Jonathan Stewart is dealing with a pulled hamstring. Both players are out indefinitely.

While Peterson was the league’s MVP in 2012, a case can be made that Stewart might be just as valuable to the Panthers at this point. Carolina comes in with the league’s top-ranked rushing offense, while the Vikings are last.

Whittaker has started three games since coming into the league as an undrafted rookie in 2012, but ran for 100 yards on 16 carries last week in a 47-26 win over the San Francisco 49ers after Stewart went down in the first quarter. Whittaker has primarily been used as a third-down back and could wind up splitting carries with Artis-Payne, a bigger, stronger runner who has more of a straight-ahead style.

”A lot of it is you prepare for the scheme and then you’re aware of the back that’s in there, whichever back it ends up being,” Vikings coach Mike Zimmer said.

McKinnon hopes to give the Vikings (2-0) a boost in the running game.

The 5-foot-9, 205-pound back has started six games during his three seasons in the league, all of those in 2014 when he ran for 538 yards and averaged 4.8 yards per carry. Asiata is a power back who could see goal-line and short-yardage carries.

Things to watch on Sunday:

Panthers center Ryan Kalil said he is bummed that he won’t be facing his brother Matt, the starting left tackle for the Vikings who was placed on injured reserve with a hip injury this week. They have faced each other twice in their careers.

”We definitely get very competitive during these weeks and we have a 1-1 tally going on,” Ryan Kalil said. ”I’m really, really disappointed for my brother and I knew he’s really upset.”

T.J. Clemmings, who started all 16 games at right tackle last season for the Vikings, will be back in a starting role.

He’s still on his NFL learning curve, as evidenced by the pass interference and defensive holding penalties he picked up on the same drive in the third quarter against Green Bay. Aaron Rodgers targeted him often. But Waynes darted in front of a fourth-quarter pass by Rodgers for a game-sealing interception in the victory, a clear sign of progress for the Michigan State product.

”I’d much rather have him be aggressive and get a couple of those once in a while than play real soft and scared,” Zimmer said of the flags thrown on Waynes.

Rhodes has returned to practice this week, which could affect Waynes’ playing time.

RECEIVERS ON A MISSION

Panthers wide receiver Kelvin Benjamin has been huge since his return from a torn ACL with 13 receptions for 199 yards and three touchdowns in his first two games back.

Meanwhile, Stefon Diggs has been tearing it up for Minnesota with 180 yards receiving and a TD in last week’s 17-14 win over the Packers.

The Panthers won last week despite turning over the ball four times. It’s something Cam Newton said the team needs to clean up against the Vikings.

”We just can’t keep allowing ourselves to go on those lulls and having those brain farts,” the quarterback said

Vikings cornerback Captain Munnerlyn spent the first five seasons of his career with the Panthers and still keeps a home in Charlotte in the offseason. So it will be a homecoming when he returns as a vital member of one of the league’s top defenses.

”It’s definitely going back home,” Munnerlyn said. ”My emotions are very high. It’s going to be a crazy game for me, back in Charlotte where I stay, and playing against my former teammates and my former coach.”