You are here: Home / News / Vikings plan huge celebration for home opener at US Bank Stadium 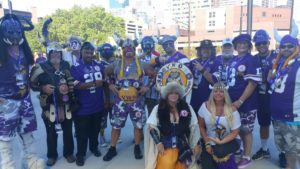 Organizers are pulling out all the stops for Sunday’s Vikings home opener at the new U-S Bank Stadium.

In addition to the game itself–Vikings versus Packers–there will be a welcome home video narrated by former Viking great Ahmad Rashad. Vikings spokesman Bryan Harper says the video is ” incredibly impactful and so for folks who have been fans of the Vikings for years or fans of the Vikings for a couple of years or whatever it may be, it’s something that should maybe pull at the heartstrings a little bit and gets the emotions going and brings back a lot of memories.”

The Vikings plan to debut the “Vikings Skol Chant,” a version of the “Vikings War Chant” that was made famous by the Iceland men’s national soccer team after their return from the Euro 2016 this summer. After video appearances by Aron Gunnarsson, the captain of Iceland’s national team, and Thor Bjornsson, a native Icelander and “The Mountain” from Game of Thrones, the entire stadium will be led in the chant by Vikings alumni, creating a new tradition as part of the U.S. Bank Stadium fan experience.

There will also be an homage to Prince, a 15-thousand square foot projection mapping on the stadium’s turf and an appearance from the Minnesota Orchestra.