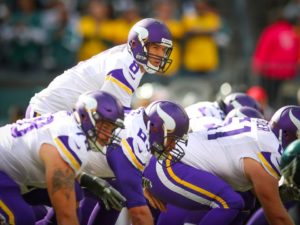 Sam Bradford was rolling along with the Minnesota Vikings right until he got squashed by his former team last week.

Then again, at least he was playing.

It’s been a while since Chicago’s Jay Cutler could say that.

Bradford tries to shake off a six-sack outing in the Vikings’ first loss when Minnesota meets the returning Cutler and the struggling Bears on Monday night.

Things couldn’t have gone much worse for Bradford and the Vikings (5-1) in a 21-10 defeat to Philadelphia that seemed to expose their shortcomings and lay out a blueprint for the rest of the league.

”I think we just realized that we’ve got a lot of work to do, but when you look at the film and you look at the things, the mistakes that we made on Sunday, they’re all fixable,” Bradford said.

”A lot of them were just mental mistakes. They’re things that we have done correctly the previous five weeks and just failed to execute or failed to do them correctly on Sunday. So, we’ve just got to get back on track and go out there and be the offense we know we can be.”

The Eagles disguised their blitzes and had their way with the offensive line. It all added up to a rough outing for Bradford .

Besides the six sacks, he absorbed 12 hits, fumbled four times and lost two of them. He also threw an interception.

The Bears (1-6), meanwhile, have struggled through injuries and poor play on offense and defense in their worst start since the 2000 team dropped seven of its first eight. For Cutler, it hasn’t been easy to watch.

”It’s hard when you’re hurt and not playing, getting back in the mix,” he said. ”You just got to keep fighting through it.

”Nothing lasts forever. And I think everyone in the locker room knows that. There’s some talent in the locker room. There’s a lot of guys banged up that hopefully we get back soon. You just got to keep playing football. That’s all we can do.”

They are getting Cutler back from a five-game absence because of a sprained right thumb. But whether they’re welcoming him back with open arms is open to debate.

The Bears have little choice, but to go with him because Brian Hoyer broke his left arm in a 26-10 loss at Green Bay in the previous game. 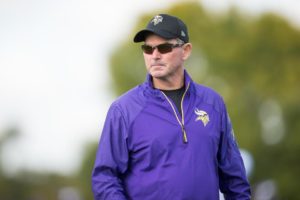 ”I do think that Cutler will give them a lift coming back,” Vikings coach Mike Zimmer said. ”He’s a big-time arm talent. I think that we’re going to have to play very well in order to win.”

There had been plenty of speculation about Cutler’s future in Chicago, particularly with Hoyer playing five-plus games without an interception. Fox only fueled it when he said the starting spot is ”performance-based.”

But it’s a moot point now.

Cutler will suit up for the first time since he left against Philadelphia in the second game of the season. The five-game absence will be the longest he has returned from in a season and he’ll be going against the league’s stingiest defense.

”They’re top five in about everything, they’ve been together for a while, they’re relatively healthy and they’re playing good football,” Cutler said.

”They’ve shown a lot of different looks, especially on third downs, but we’ve … seen a lot of it. We kind of know how to attack it, but it’s just going to be about execution and guys doing exactly what we need to do.”

As for Bradford and the Vikings, Minnesota had been playing well enough to mask its weaknesses and pile up wins despite serious injuries to Teddy Bridgewater and Adrian Peterson.

A big reason was their new quarterback, who was thriving after a trade from Philadelphia on Sept. 3. The Vikings were scrambling for one and made the move just days after Bridgewater suffered his serious knee injury.

Despite a crash course in learning the Vikings’ system, Bradford came into the game against the Eagles with the NFL’s top completion percentage and No. 2 passer rating. But against Philadelphia, things didn’t go so well.

The Eagles disguised blitzes out of zone packages and had their way with a patchwork offensive line.

”I think each defense is different, but obviously, I’m sure Chicago is looking at what they did and what they had success with,” Bradford said. ”And I’m sure we’ll see some carry-over, so we’ve got to be prepared to see some of that.”