You are here: Home / Sports / Vikings QBs getting ready for Titans 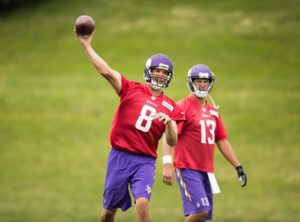 Shaun Hill could take the first snap Sunday when the Minnesota Vikings open their season against the Tennessee Titans at Nissan Stadium in Nashville, Tenn.

But if two NFL games 21 years apart mean anything, Hill might not finish.

Titans coach Mike Mularkey was blunt when asked if he expected Sam Bradford to start Sunday.

“The number of starts (Bradford) has, he’s a very intelligent quarterback, he’s faced this defense before,” Mularkey said as he listed the reasons he believes that Bradford will be the starter. “They wouldn’t give up a 1 (first-round pick) and a 4 (fourth-round pick) to have him sit very long.

“He’s had a very good preseason — really, both the quarterbacks had good preseasons. I would anticipate (Bradford) starts, and if he doesn’t, it’s not going to change how we prepare.”

In 1993, when current Minnesota offensive coordinator Norv Turner owned the same position with the Dallas Cowboys, starting quarterback Troy Aikman sat out a game against the Cardinals because of a hamstring injury.

Jason Garrett started, but Bernie Kosar, signed five days before the game after being canned by Bill Belichick in Cleveland, was the backup.

Before the first quarter was finished, Kosar was in the game and played its remainder, completing 13-of-21 passes with a touchdown in Dallas’ 20-15 win.

Two years ago, Hill started the opener for St. Louis after Bradford went down with a season-ending ACL tear in the third exhibition game. Hill lasted a half, going 8-for-13 for 81 yards and an interception before a thigh injury knocked him out.

The Rams were 34-6 losers that day to … the Vikings, whose Turner-run offense extracted an efficient day from quarterback Matt Cassel while getting help from a defense that contributed an interception return score.

Two years later, the 36-year old Hill again plays the role of veteran backup filling in for young franchise quarterback, in this case Teddy Bridgewater, who will have surgery on his torn ACL Thursday.

To complete the circle, Minnesota opted to fortify the quarterback position last weekend by acquiring Bradford from Philadelphia for a first-round pick in next year’s NFL Draft and a fourth-round pick in 2018.

Turner will have had eight days to acclimate Bradford and perhaps make him functional if Hill struggles or is injured.

Speaking after practice Wednesday, Bradford is happy with the progress he’s making picking up the offense.

“Obviously, I’m much more comfortable today than I was on Sunday,” he said. “It just helps getting reps at practice. I’ve been studying more of our playbook this week, making sure I’m comfortable with what we’re doing.”

Tennessee’s quarterback has no such issues. Marcus Mariota enjoyed a good rookie year despite missing time with injuries, and has looked sharp during training camp and exhibition games.

The Titans’ preseason, unlike Minnesota’s, has been mostly positive. Coach Mike Mularkey’s run-first approach appears to be taking shape as the line has shown signs of being physical, while backs DeMarco Murray and Derrick Henry could be a dangerous 1-2 punch.

Murray has looked more like the guy who led the NFL in rushing and won Offensive Player of the Year honors two years ago as Dallas won the NFC East, while Henry appears to be a second-round steal, based on averaging more than six yards per carry in exhibition play.

“It’s time to do what we came here to do,” Henry said of making his NFL debut.

While Tennessee plans to run first and then take its chances in the air off play-action, the Vikings also have a capable weapon at running back.

Adrian Peterson is their go-to guy in most circumstances, and even more so now with the loss of Bridgewater.

Peterson recorded his seventh 1,000-yard season in 2015, with 1,485 yards and 11 touchdowns, and although he’s ancient by running back standards at 31, he shows no signs of slippage.

The former MVP enters the season with 11,675 yards in nine years, one of which was shortened by injury and another that was ended after Week 1 in 2014 due to legal trouble.

“Teddy’s a phenomenal player, but even when he was in there, it all starts with Adrian,” Titans defensive end Brian Orakpo said. “We’ve got to be sound against the run. We’ve got to hit our run fits and do a good job against 28 (Peterson). He’s been doing it for years.”

This will be the first time the teams have met since 2012, when Minnesota whacked Tennessee 30-7 in Week 5.

This will be the Vikings’ first visit to Nashville since 2008 and the first time these teams have opened against each other since 1989, when the Titans were doing business as the Houston Oilers.