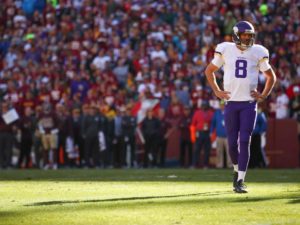 Sam Bradford grabbed his helmet with two hands and slammed it down on the sideline.

The Vikings quarterback had just been picked off late in what would become a 26-20 loss to the Washington Redskins on Sunday, Minnesota’s fourth consecutive defeat in a season that began with five consecutive victories and now is slipping away.

Afterward, Bradford was asked what he could have done better on this afternoon.

”Not throwing an interception in the fourth quarter would’ve helped,” Bradford replied.

Scoring a single point in the second half might have been useful, too.

”We’ve just got to be more consistent,” Bradford said.

Showing the sort of up-and-down play that encapsulates its season, Minnesota (5-4) trailed 14-0 less than a minute into the second quarter, put up three TDs in about 5 1/2 minutes at the end of the half to take the lead, and got outscored 12-0 the rest of the way.

”I’m concerned, obviously, but I still believe,” coach Mike Zimmer said. ”I believe that (if) we do a couple things here or a couple things there, we’re going to win some games. … I just feel like if we can get over the hump, if we can keep fighting until we do that, positive things will happen. It doesn’t look like that right now.”

The Vikings had problems in all three phases of the game. Blair Walsh missed an extra point on the final play of the first half, making him only 15 for 19 on the season. This came after Minnesota invited a half-dozen free agents to a tryout during the week before deciding to keep Walsh.

”Honestly, I didn’t even see the kick, so I don’t know what happened on it,” Zimmer said, ”other than he missed.”

Asked whether he would evaluate Walsh’s status again, Zimmer replied: ”Yes, I will evaluate everything.”

Plenty for him to look at, including an offense that was shut out after halftime and twice failed to convert on third-and-1.

”There’s no excuse,” guard Brandon Fusco said, ”for not getting a yard.”

The Vikings generally have become unable to run the ball since injuries to Adrian Peterson and starters along the offensive line. That last part only appeared to get worse on their final drive Sunday, when left tackle Jake Long – as it is, he was on the field because Matt Kalil is on IR – was carted off with an Achilles tendon injury. Zimmer said he believes Long is done for the season.

Then there’s the defense, which played at a level approaching historic greatness at the start of the season and now is merely OK.

If the Redskins had not repeatedly stalled inside the red zone, the Vikings might have allowed more than four field goals in the second half.

”We’ve got to create more turnovers. We’ve got to be better on third down. There’s a lot of things that aren’t happening for us right now,” defensive end Brian Robison said. ”At the end of the day, we’ve got to figure out what it is that we’ve got to get back to doing.”

Robison was referring to the defense in particular, but he could have been talking about the entire team.

Zimmer insisted his players are still fighting, still putting in the right amount of effort to have more success.

That was the coach’s message to the media – and in the locker room.

”After a while, you get tired of hearing that, and you’ve got to win a … game,” guard Alex Boone said. ”You can only say you played so tough for so long until it doesn’t count anymore. These are games you’ve got to win.”