You are here: Home / Sports / Vikings remain unbeaten with 24-10 win over Giants 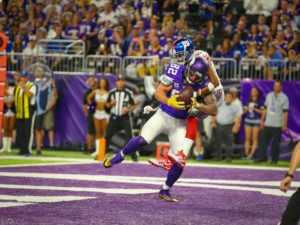 Minnesota’s defense denied Odell Beckham Jr. all night and forced two turnovers that led to 10 points, and the Vikings mystified Eli Manning yet again during a 24-10 victory Monday over the New York Giants.

Sam Bradford threw a touchdown pass to tight end Kyle Rudolph for the third straight game and kept his turnover-free streak intact, helping the Vikings (4-0) lead from start to finish after falling behind in each of their first three wins and record their first 4-0 start since 2009. The Vikings, Eagles and Broncos are the only remaining unbeatens.

Beckham, who has yet to score this season, was smothered by cornerback Xavier Rhodes and had a career-low 23 yards on three catches.

Victor Cruz and Sterling Shepard were quiet, too, and Manning was erratic as ever while finishing 25 for 45 for just 261 yards. Rhodes picked him off in the third quarter , the 15th interception for Manning in eight career starts against the Vikings. He’s 2-6 with only five touchdown passes.

Matt Asiata and Jerick McKinnon each ran for a touchdown as the Vikings rushed for a season-high 104 yards to strike their best balance of the season as they continue to craft a post-Adrian Peterson strategy without their injured veteran running back. Bradford went 26 for 36 for 262 yards, thriving with quick-release throws behind an offensive line that protected better than it had in any of the previous three games.

”I didn’t get hit, hardly at all,” Bradford said. ”The game ball should go to those guys.”

The Vikings, who have allowed only 50 points in four games and rank second in the league in that category, have an NFL-best turnover margin of plus-10. The Giants (2-2) dropped to minus-8 for the season, including a muffed punt in the first quarter by Dwayne Harris that was forced by Vikings wide receiver Cordarelle Patterson in his new role on the coverage team.

”A good team on the road, especially this team, you can’t give them two possessions,” Giants coach Ben McAdoo said. ”The message is getting through. I just think we need to take care of the ball.”

Rudolph’s wife, Jordan, was scheduled to give birth to twins by induction on Tuesday morning. He joked he wanted a second touchdown catch, one for each of his soon-arriving children. Bradford might as well be their godfather with the way he’s connected with his sure-handed tight end.

”We kind of had a bond early,” Bradford said, adding: ”He’s just such a big target.” 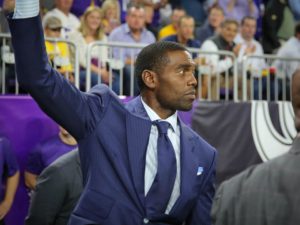 Former Vikings wide receiver Randy Moss, at the game as an analyst for ESPN, blew the ceremonial Gjallarhorn prior to kickoff to get the crowd going early. Fifteen years ago, Moss caught three touchdown passes on a Monday night game as the Vikings beat the Giants 28-16.

The Giants defensive backs are so depleted by injuries that wide receivers were playing safety in practice this week. Andrew Adams, promoted from the practice squad last week, started at safety for Nat Berhe. Trevin Wade had trouble all game, starting at cornerback for Dominique Rodgers-Cromartie. Wade was beaten by Charles Johnson for receptions of 30 and 40 yards, had a pass interference penalty on Rudolph and got away with one on an early incompletion to Adam Thielen.

Giants TE Larry Donnell (concussion) was blown off his feet in the second quarter by blitzing Vikings LB Anthony Barr and quickly ruled out for the rest of the game. Donnell was obviously woozy as he walked slowly to the sideline.

Vikings RT Andre Smith (right elbow) was hurt in the first quarter and was replaced by Jeremiah Sirles.

The Giants play at Green Bay (2-1) on Sunday night.