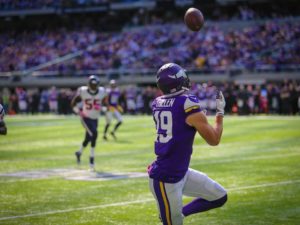 Adam Thielen caught a touchdown pass to cap Minnesota’s opening drive and finished with a career-high 127 yards, and the Vikings defense flustered Brock Osweiler and the Houston Texans on their way to a 31-13 victory on Sunday.  Thielen is a Detroit Lakes native, who played college football at Minnesota State-Mankato.

Rochester native Marcus Sherels, former Golden Gopher, returned a punt 79 yards for a touchdown and Cordarelle Patterson scored on another sharp throw by Sam Bradford, who produced another turnover-free game and deftly guided the Vikings (5-0) into their bye week.

Brock Osweiler was overmatched by Minnesota’s relentless rush and coverage, finishing 19 for 42 for 184 yards, one interception and a late touchdown pass while taking four sacks. The Texans (3-2) were denied on 12 of 13 third downs, unable or unwilling to do much other than dump off short passes. Lamar Miller only had eight carries for 20 yards during a dud of a performance by the Texans that felt a lot like the 27-0 loss at New England two weeks ago.

With leading receiver Stefon Diggs out for the game with a groin injury, Thielen and Patterson capably stepped up for the Vikings. Whitney Mercilus had 1 1/2 sacks as Houston took advantage of a banged-up offensive line to plenty of pressure on Bradford, but with touchdowns on their first two drives the Vikings were in cruise control as they eagerly unleashed their defense again on another out-of-sync quarterback.  Thielen says he was happy to pick up the void left by Digg’s injury:

Will Fuller wasn’t targeted until the first play of the second half and had only one catch, a head-scratching fourth-and-16 call in the third quarter at the Vikings 39 that netted 4 yards on a screen play.

After stifling Odell Beckham Jr. on Monday night in the win over the New York Giants, Minnesota cornerback Xavier Rhodes hounded Houston’s DeAndre Hopkins. Rhodes was called for pass interference (34 yards) and holding (5 yards) to give the Texans their first two first downs during a second quarter drive that yielded a field goal, but Hopkins was held without a catch in the decisive first half.

Hopkins finished with 56 yards and a touchdown on five receptions after the Texans went into catch-up mode.

Vikings: RG Brandon Fusco (concussion) was forced out on the first drive of the game, replaced by Zac Kerin and leaving the OL without three starters. With Rhett Ellison and David Morgan already inactive with knee injuries, a third TE went down when MyCole Pruitt hurt his knee in the third quarter. … Patterson hurt his hip in the second quarter and stopped returning kickoffs but was back on offense for the TD, his first from scrimmage since Oct. 19, 2014.