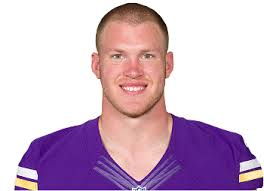 Kyle Rudolph’s two most productive seasons for the Minnesota Vikings were also those in which he played every game, not coincidentally.

After all the surgeries, crutches and rehab, Rudolph has found a training program to supplement team-supervised workouts that has contributed to the durability he’s long sought to establish. The sturdiness of his body at age 26 has become equally important as the agility and strength needed to thrive as an NFL tight end in the prime of his career.

”It’s all about playing 16 games,” said Rudolph, who found his happy place in downtown Minneapolis at the Mayo Clinic Sports Medicine Center through a joint venture with the specialized performance training firm EXOS.

Jennifer Krogman’s goal was just to be able to do some pushups again.

”It was a thrill,” she said. ”This was the first progress I’d ever made.”

After eight surgeries in nine years on her long-ago-broken left wrist, Krogman has finally discovered a way to work out at an intense level without neglecting or damaging the joint that has troubled her so. The activities this former high school basketball player and track sprinter has been engaging in at Mayo’s EXOS site in Rochester, Minnesota, actually aren’t that all dissimilar from what Rudolph has done to prepare for the football season.

”The elite athlete is the beacon that gets all the attention, but those same principles trickle down to how we treat every athlete,” said Dr. Ed Laskowski, the co-director of Mayo’s sports medicine operation.

Founded in 1999 in the Phoenix area as Athletes’ Performance, Inc., EXOS has used its experience training first-round draft picks and Olympians as a springboard into the corporate world. EXOS has more than 100 business clients, whether strengthening employee wellness programs or seeking healthier lifestyles for constantly traveling top executives.

Call this the combine for the common man.

”Obviously the stakes are a little bit different. There may not be an audience. It may not be televised, but it still has a great internal impact on you,” said Alex Lincoln, an EXOS vice president and a former linebacker at Auburn and with the San Francisco 49ers.

EXOS is far from alone in the fitness marketplace, but finding another reach so deep into the regular-folks pool would be difficult. The program, no matter the subject, is based on four pillars: mindset, movement, nutrition and recovery. Personalized, sustainable and measurable are parameters for implementation, blending the capability of high technology with the secrets of sports science.

Trainers can pull out an iPad to evaluate an athlete’s stride in attempt to correct a mechanical flaw or prevent further injury.

”A lot of exercise is based on tradition. We’re going to do something because that’s what Arnold did to get stronger, or a coach has told us stuff. Very well-meaning coaches, but a lot of stuff they told us was based on tradition and not based on the rules of the body,” Laskowski said. ”So as we’ve developed those areas, we’ve found that there are biomechanical patterns that need to be optimal. Perfect practice makes perfect. We want you to be doing it right from the first time.”

Even with a wide range of costs, individualized, intense work isn’t cheap. Krogman’s five-times-per-week sessions break down to about $20 apiece, though, a fee she’s adamant is just as worth it as are the 5:45 a.m. starts.

Now that she’s mastered techniques for the deadlifts and other weight-bearing exercises without compromising her wrist, Krogman has set her sight on a more ambitious cardiovascular goal: the 7-minute mile she once could run.

”Everyone else has always told me, `No, you can’t do this. You just have to get used to walking, running, riding a bike. Lifting weights, you can’t do,” Krogman said. ”I was like, `No, I’m pretty sure I can still do that.”

In between Rudolph and Krogman are the college athletes like Haley Nielsen and Stephen Kalina who’ve taken part in small-group sessions at the Mayo-EXOS site in Minneapolis this summer, pushing sleds on the artificial turf and sweating through plyometric box jumps.

Nielsen, a hockey player for Wisconsin-River Falls, came in search of more explosiveness on the ice. Kalina, a middle infielder at Purdue, wanted to stay in shape and add strength and weight while many of his teammates were playing in summer leagues.

”I’m hoping to come back and show how beneficial it is,” Nielsen said.

Another key to the program is sports-specific movements that work the muscle groups needed to perform in game time. Kalina, for example, envisions stealing a base during crossover drills as he tries to explode out of his first three or four steps. Then there are the core muscles and legs that generate the power in a swing.

”It’s great to have the big biceps and all that,” Kalina said, ”but you need a stronger base so we really focus on that.”

Rudolph, who finished his second summer at EXOS before the Vikings reported to training camp, has overcome operations on his hamstring and both hips, plus a broken foot and a sprained knee. He enjoyed an injury-free season in 2015, his first since 2012.

These days, his focus is on efficiency to keep his body as sharp as possible and agility drills to mimic route-running down the field.

”A lot of times the guys who are covering me are much faster than I am,” Rudolph said, ”but if I’m moving efficiently, not wasting any motion, it gives me an advantage to get open.”