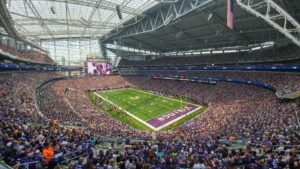 Following a decade-plus of lobbying and 2+ years of construction, the Minnesota Vikings have arrived at the grand opening of their new stadium, with the Green Bay Packers serving as the fitting visitors on the national stage of a Sunday night game.

The Vikings will unveil yet another starting quarterback in the history of this rivalry, too, a series controlled by the Packers since Aaron Rodgers assumed the signal-caller’s role. Rodgers has extended what’s been a remarkable run of stability and success at the sport’s most vital position dating to the dawn of Brett Favre’s career.

”We’re obviously blessed,” said Packers coach Mike McCarthy, who overlapped with Favre’s final two seasons in Green Bay and is 15-5-1 against Minnesota since taking the job in 2006. McCarthy added: ”I’m sure they kiss their mothers every chance they get.”

Favre, the newly minted member of the Pro Football Hall of Fame, and Rodgers, the two-time NFL Most Valuable Player, have made the Packers the envy of the league, let alone of the Vikings, for nearly 25 years. Their elite ability has been supplemented by exceptional durability, further underscored by the devastating knee injury that knocked Minnesota quarterback Teddy Bridgewater out for the season and maybe longer.

”Hopefully I can ride this out a little longer and then pass along to the next guy who’s going to go on a run like Brett and I have,” said Rodgers, who has begun his ninth year as the starter with only nine games missed.

Seven of those came in 2013 when his broken collarbone forced three other quarterbacks into action. Since Rodgers took over, he has opposed six different Vikings starters out of the 10 that they’ve sent out since 2008. If Sam Bradford makes his widely expected debut on Sunday, those totals would reach seven and 11.

”I’ve kind of been laying back and getting my shoulder warmed up and taking some snaps from the quarterback position, so we’ll see how things go and hopefully they give me the nod,” Vikings star running back Adrian Peterson joked this week.

Here are some key angles to know about the game:

Blair Walsh, who infamously missed the 27-yard field goal that would’ve sent the Vikings to the next round of the playoffs last season, had an extra point in the opener sail wide right, and two field goals hook wide left. Walsh made one extra point and four field goals to fuel a 25-16 victory over Tennessee, but he could’ve given the Vikings seven more points.

”He’s too good of a kicker to miss the type of kicks he’s missing,” special teams coordinator Mike Priefer said.

The Packers held cornerback Sam Shields out of practices this week because of concussion symptoms after getting hurt at Jacksonville. Rookie backup Josh Hawkins has been unavailable due to a hamstring injury. Backup safety Micah Hyde can switch to cornerback, but depth could be an issue.

The Vikings played their opener without cornerback Xavier Rhodes, whose knee injury kept him out of practices this week too. Trae Waynes stepped in and was targeted often by Titans quarterback Marcus Mariota, with mixed results in coverage.

”He was one step away, one fingernail away, from making those plays,” Vikings nickel cornerback Captain Munnerlyn said. ”That’s the NFL. You’ve got to make those plays. I think this week he’ll be even closer.”

Left guard Lane Taylor and Green Bay’s revamped front five had a solid debut in the opener, but blocking the Vikings should be a much greater challenge. Taylor took over fter three-time Pro Bowl pick Josh Sitton was surprisingly released on cutdown day.

Former jack-of-all-trades backup J.C. Tretter will make his second start at center, having stepped in because Corey Linsley hurt his hamstring in training camp. The Packers had communication trouble on a few snaps against the Jaguars, a must-fix problem prior for what’s sure to be a deafening debut for U.S. Bank Stadium.

The Packers’ defense fared well against Peterson last season, holding him to 112 yards on 32 carries over two games with Clay Matthews playing inside linebacker. Peterson was limited to 31 yards on 19 rushes in the opener last week. Matthews has moved back to his preferred spot as a full-time pass-rushing outside linebacker in Green Bay’s 3-4 scheme, but containment of Peterson transcends Matthews and his position.

”It’s going to take 11 men getting to the football,” strong safety Morgan Burnett said. ”You can’t hang your hat on those types of stats, because he’s the type of back that can bust out and have a big game anytime.”