You are here: Home / Sports / Vikings want to shut down Lions QB Stafford 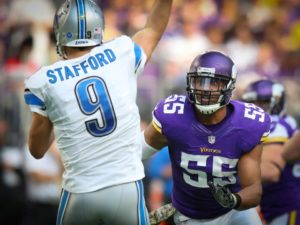 The Detroit Lions haven’t hosted a playoff game in 23 years, but a win on Thanksgiving will put them tantalizingly close to doing just that sometime in January.

The Lions host the Minnesota Vikings in their annual Thanksgiving game Thursday in a showdown of co-leaders in the NFC North. Both teams are 6-4, two games ahead of the third-place Green Bay Packers, but the Lions won in Minnesota earlier this month and can take a commanding lead in the division race with a sweep of the season series.

“The stakes in this game are pretty high,” Lions safety Glover Quin said. “We all understand that. I’m pretty sure they understand it as well, so it’ll be fun. What better way to get the Thanksgiving holiday started off with a good football game at 12:30 on Thursday?”

After losing nine straight Thanksgiving games from 2004-12, eight of them by double digits, the Lions have been dominant in their annual turkey-day affair the last three years.

They’ve won three straight Thanksgiving games, two of them against division opponents, by a combined 78 points.

Thursday’s game, given the strength of the Vikings’ defense and the offensive struggles of both teams, should be a nail-biter on par with the Lions’ 22-16 overtime win in Week 9. But the timing of playing a familiar opponent for the second time in 18 days adds a wrinkle to both team’s game prep.

“From a game-planning standpoint, at least we’re familiar,” Lions quarterback Matthew Stafford said. “They’re fresh in your mind from just a couple weeks ago. It doesn’t diminish the challenge that the Minnesota Vikings give us. They’re a really good defense, a really good team and really well coached. We’ll have our hands full, but as far as a preparation standpoint it doesn’t seem like too long ago I was looking at film of these guys.”

Lions head coach Jim Caldwell has tried his best to downplay the stakes of the game this week, and in typical fashion wouldn’t entertain talk of the playoffs.

The Lions last won their division in 1993, and no matter what happens Thursday they will still have five games left on their schedule.