You are here: Home / News / Voters in 7th Congressional District to decide Peterson or Hughes for U-S House (Audio) 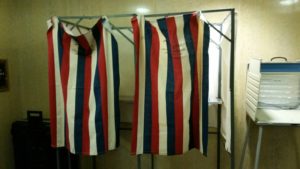 Voters in the Seventh Congressional District in western Minnesota decide tomorrow whether to send long-time Democratic Congressman Collin Peterson back to the U-S House, or elect Republican challenger David Hughes — a retired Air Force officer and aerospace engineer. Hughes says about Peterson’s focus on agriculture, “You have to represent your district in the context of what’s facing the nation, and agriculture is not one of the dire issues facing the country right now.”  Hughes says the national debt *is* a major issue, but that’s something Peterson doesn’t talk about.  Peterson responds, that’s not true at all.  He says the national debt is not on people’s radar screens and when he brings it up, it doesn’t get covered.  Peterson adds he’s supported a Balanced Budget Amendment for 20 years, but the Republicans are in charge now and “haven’t done a darn thing about it.”

Hughes says the federal subsidy for crop insurance is too high, but opponent Peterson “always talks about making the safety net bigger and stronger, and what does that mean? That means spending more money.”  Peterson responds Republicans tried a free-market approach in 1996 by starting to phase out federal subsidies and “within two years the prices collapsed and we spent more money bailing farmers out — three times as much money as was saved by passing the bill in the first place.”  Peterson says the U-S has to keep its farmers on even par with those in the rest of the world.

On the presidential race Peterson says, “I’m where the majority of my constituents are, and that is I don’t like either choice. And that’s what I hear every place I go.”  Peterson says Hillary Clinton’s support of “Waters of the U-S” regulations is “almost a deal-breaker” for him.  But Peterson says he disagrees with Donald Trump on repealing Obamacare.

Hughes says he has trouble with some of things Donald Trump has said but, “I’m more concerned with the things that Hillary has done and her 25-year track record, public record, since she and Bill came out of Arkansas — and then even longer-track record of her enabling the equally much… worse moral behavior of her husband.”

Here’s a long-form interview with Hughes:

And one with Peterson: