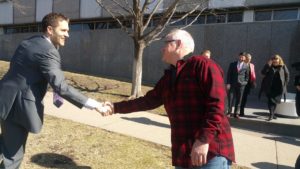 Rep. Walz in red flannel at MN State Capitol as he makes run for governor official

Democratic Representative Tim Walz of Mankato today announced he is running for governor of Minnesota in 2018.

Walz says he has a vision…

Walz is currently serving his sixth term and is the top Democrat on the Veterans Affairs Committee. He joins the list of high-profile Democrats, including State Auditor Rebecca Otto and St. Paul Mayor Chris Coleman, who have announced their candidacies.  Governor Dayton is not seeking re-election at the end of his current term.

“Tim Walz clearly realizes that it would be easier to run for Governor than to defend the failed liberal policies of Nancy Pelosi. We fully expect this seat to be a top pickup opportunity for Republicans in 2018. Not only did Walz barely scrape by in November, Trump won the District by 15 points.”