You are here: Home / Sports / Wild back home tonight, skating against Flames

When their team scores a goal at home, Calgary Flames fans are used to fire shooting from strategic points in their building’s ceiling, not from the home team’s bench.

Still, Flames first-year coach Glen Gulutzan is finding himself on an increasingly hot seat with less than 20 percent of the season’s games played as Calgary sinks further and further back in the Western Conference standings.

The Flames come to Minnesota on Tuesday having lost four in a row, and owning a 5-10-1 mark, which is second-worst in the league (ahead of only the Arizona Coyotes).

All of that recent losing had Gulutzan juggling his lines on Monday at practice before the team boarded a Minnesota-bound plane, looking for a new spark.

“When you lose four in a row, you’ve got to make some changes,” Gulutzan said, without revealing the exact combinations the Wild will be expected to counter on Tuesday, although it looks as if Alex Chiasson will move to the second line and be replaced by Troy Brouwer, who will play with regular top-liners Johnny Gaudreau and Sean Monahan. “Any guy we’ve got here we’ve got a chance of putting in, so we’ll see how the lineup transpires.”

The Flames have scored just four goals during the four-game skid, and speculation is growing in Calgary that an early-season coaching change may be needed. However, Gulutzan, who coached the Dallas Stars for two seasons and is in his second head-coaching gig in the NHL, is less concerned about offense and focusing more on his team’s inability to consistently stifle the opponents’ offense.

“Everybody’s talking about the points, but the reality is we’ve given up 60-some goals, 50-some goals,” Gulutzan said. “If you go back a year from now, one of the reasons we didn’t have success is we gave up 260-some goals. The top teams in the league don’t do that.” 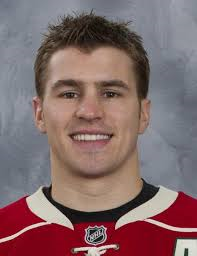 After a brief power outage in early November, the Wild (8-5-1) are back to looking like one of the top teams in the league, coming home after two weeks away and having just collected four of a possible six points on a three-game eastern road trip. And the health news is even better in Minnesota, after star left winger Zach Parise skated in practice on Monday and may return to the lineup after a two-week absence caused by a lower-body injury.

“It’s good. It beats skating on your own,” Parise said Monday after practice. “It’s one of those things I needed to get the progress and get back to feeling good again. It was good to be practicing with the team.”

Parise said he felt fine and would make his case to coach Bruce Boudreau about a return to the ice against the Flames on Tuesday, hoping to join Charlie Coyle and Eric Staal on the team’s top line.

It is the start of a whirlwind stretch in which Minnesota will play seven games in 12 days — five of them at home.

The Wild defense is on a roll, having allowed just nine goals in the past eight games.