You are here: Home / News / Wild Beat Blues in Overtime

(St. Paul, MN)  —  The new guy on the scene, Ryan Donato, swooped in and gave the Wild a 2-1 overtime win on Sunday night in St. Paul.  Donato, acquired for Charlie Coyle last week from Boston, scored his first goal in a Wild uniform 2:29 into overtime to lift the Wild to a third straight win. 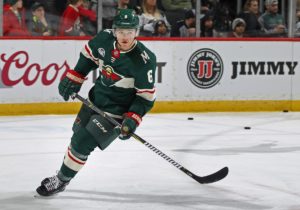 New Wild forward Ryan Donato has four points in three games since joining the Minnesota Wild last week in a trade with Boston.

Donato now has four points in three games with Minnesota.  Jason Zucker scored the first goal of the contest midway through the second but the Blues tied the game on an Alex Pietrangelo power play goal in the third.  Devan Dubnyk shut the door the rest of the way with nine third period saves and 27 saves in the win.  He’s won three consecutive starts as the Wild also stopped a six game losing streak on home ice.  The win was the first in St. Paul since January 19th.

The Wild improve to 30-27-6 with the win and their 66 points, at least for the time being, puts them alone in the second Wild Card spot in the Western Conference.  The also finish the season series with the Blues going 3-1-0.  The Blues suffer just their second loss in the last 14 games and they remain in third place in the Central Division with 72 points.  Jake Allen suffered the loss on 33 saves.

The Wild return to the ice on Tuesday night when they face the Jets in Winnipeg at 7 P-M.