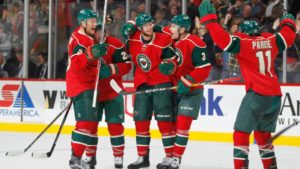 Eric Staal scored twice and the Minnesota Wild recovered from another deficit to beat the Toronto Maple Leafs 3-2 on Thursday night.

Staal has three goals in his first four games with his new team, and his game-winner with 8 minutes left kept Minnesota unbeaten in its three-game homestand despite allowing the first goal in each game.

Zac Dalpe scored his first for the Wild, and Devan Dubnyk stopped 31 shots.

Toronto let another third-period advantage slip away as No. 1 overall draft pick Auston Matthews continued his scorching rookie season with his fifth goal in four games. The Maple Leafs surrendered a four-goal lead in a 5-4 overtime loss a night earlier at Winnipeg.

Minnesota hasn’t started well in its games, but led by newcomer Staal and new coach Bruce Boudreau the Wild have been able to pull themselves out of the early deficits.

Polak opened the scoring nine minutes into the second period with a shot from the point that found its way past Dubnyk’s shoulder. Staal answered with his first goal 56 seconds later when Charlie Coyle took a loose puck and spun around to find Staal streaking to the net for a breakaway.

Matthews, the rookie who debuted with a four-goal game last week, added a power-play goal for the Leafs.

The Wild entered the game one of three teams yet to allow a power-play goal this season. The penalty kill reached a perfect 12 for 12 before Matthews’ tally. Minnesota was 27th in the NHL last season in penalty kill at 77.9 percent a year after leading the league at 86.3 percent.

NOTES: Polak replaced D Martin Marincin, who missed the game with a lower-body injury. … Wild D Marco Scandella was scratched before the game with an illness. Matt Dumba took his spot in the lineup after he was a minus-2 in the first three games. … Minnesota was 5-25-6 last season when giving up the first goal. … Coyle has a point in every game this season. … Kadri reached 200 career points with his assist.

Maple Leafs: Finish its road trip on Saturday at Chicago.