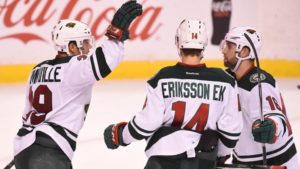 Coyle and Stewart scored 12 seconds apart during a four-goal second period, Devan Dubnyk made 27 saves and the Wild beat the Bruins 5-0 on Tuesday night.

”That first period was ugly. We thought it was going to be a long night if we kept playing like that,” said Ryan Suter, who also scored. ”We knew that we had more and we finally started to play the way we needed to play.”

Malcolm Subban made his second career start but was pulled after allowing three goals on 16 shots. He was replaced by Zane McIntyre, who made his NHL debut just hours after being called up from AHL Providence.

Dubnyk got his 20th career shutout and the first for the Wild this season.

”That’s what we’re looking for on the road,” Dubnyk said. ”We played hard. We got scoring chances. We outscored them. We were just doing a lot of good things.”

Subban started but was pulled after Suter’s power-play goal 10:36 into the second period put Minnesota up 3-0. McIntyre took over and finished the rest of the game, stopping 15 of 17 shots.

With starter Rask day-to-day and Khudobin out for several weeks, Boston coach Claude Julien said the Bruins didn’t give their youngest goalies much help.

”I don’t care who’s in net,” Julien said ”I think when you have some injuries you need to be better in those situations and we weren’t good enough tonight.”

Jason Zucker had a goal and two assists, Suter added an assist and rookie Joel Eriksson Ek got his first three NHL assists. Jason Pominville scored in the third period. 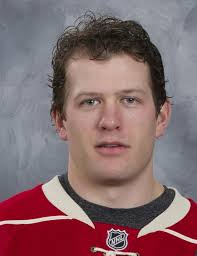 The Wild broke the scoreless tie 5:07 into the second when Coyle tapped in his own rebound, then Minnesota struck again when Zucker slipped a pass from behind the net to Stewart, who hit a one-timer past Subban to put the Wild up 2-0.

”To add on like that was important because we didn’t have a letdown,” Suter said. ”We got one and then we kept building on to that.”

Fans mocked Subban’s struggles by cheering McIntyre after a routine stop, but there was little else to cheer on the night. Zucker took a pass from Suter with 3:21 left in the second to give the Wild a 4-0 lead after two.

”You look at what you could have done and you can’t dwell over it,” Subban said. ”I’ve got to keep working through it. That’s all you can really do.”

Notes: Subban’s only previous NHL experience was a start at St. Louis on Feb. 20, 2015, when he was pulled early in the second period after allowing three goals on six shots. … Zucker’s goal with 3:21 left in the second made him the 16th player to score for the Wild in the first seven games of the season. … McQuaid made his season debut for Boston after missing the first five games with an upper body injury. … The Bruins called up McIntyre from AHL Providence earlier in the day. … Boston C Tim Schaller received his first NHL fighting major after taking on Zac Dalpe 2:04 into the game.

Wild: Visit Buffalo on Thursday to close out a four-game road trip.

Bruins: Visit the Rangers on Wednesday night, the first of four straight on the road.