You are here: Home / Wild / Wild Bow to Blues But Get Them Again New Years Day

(St. Paul, MN)  —  Marcus Foligno scored the only goal for the Wild as they fell to the Blues 4-1 on Sunday night at Xcel Energy Center. The Blues got goals from four different scorers including a short handed marker from Ivan Barbashev 5:04 into the third to finish the scoring.  The Wild have dropped three straight on home ice.  Jordan Binnington made 32 saves for the Blues for their fourth straight win as they continue to lead the Central Division.  The Wild are home against the Blue Jackets on Tuesday night at 7 p.m. 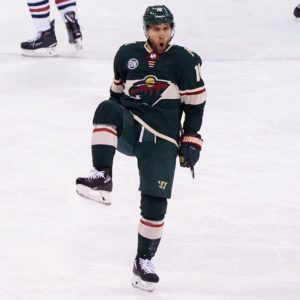 Already the Wild have dealt Jason Zucker leading into the trade deadline today at 2 p.m. Who’s next?

The question is what will the team look like come Tuesday night because the NHL trade deadline is coming up on Monday afternoon at 2 p.m.  Already Wild general manager Bill Guerin pulled the trigger on a trade last week when he sent Jason Zucker to Pittsburgh for Alex Galchenyuk, a blue chip prospect and the Pens first round pick in the upcoming NHL Entry Draft.  Michael Russo of The Athletic reported yesterday that Wild captain Mikko Koivu will not waive his no trade clause which means he will not be on the move today.  Already there’s been plenty of activity across the NHL including former Wild defenseman Marco Scandella landing in St. Louis and last night Illya Kovaulchuk was dealt from Montreal to Washington.  No telling what the line up will look like come this afternoon let alone next New Years Day but the Wild announced the Blues will be their opponent for the 2021 Winter Classic at Target Field on January 1st, 2021. 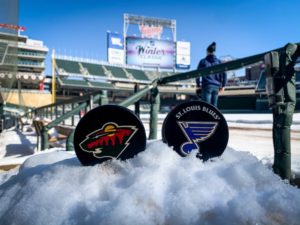 The NHL announced on Sunday night that the Blues will face the Wild in the 2021 Winter Classic on January 1st at Target Field.

This will be the first Winter Classic for the Wild and their second regular season outdoor game.  The Wild also hosted the Blackhawks on February 21st, 2016 in a Stadium Series game at T-C-F Bank Stadium.  The Wild won that game 6-1.  For the Blues, this will be their second regular season outdoor game as they hosted the Blackhawks at Busch Stadium and beat them 4-1 on January 2nd, 2017.