(Detroit, MI)  — The Wild got points from 13 different players as they slammed the Red Wings 7-1 on Thursday night at Little Caesars Arena in Detroit.  Matt Dumba and Kevin Fiala each had three points while Alex Stalock made 25 saves in the win.  Dumba scored twice while the Wild also got goals from Ryan Hartman, Ryan Donato, Jordan Greenway, Fiala and Eric Staal.  The Wild have won four straight on the road and are now 8-3-1 in their last 12 overall.  The Wings have the worst record in the league with just 15 wins and have lost 18 of their last 21. 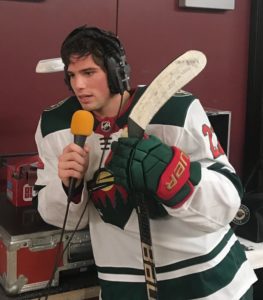 Tonight the Wild are back on the ice tonight in Columbus for a rematch with the Blue Jackets.  Tuesday the two teams met in St. Paul and despite a mad rally by the visitors, the Wild were able to hang on for a 5-4 win.  Mikko Koivu scored twice in the second period to put the Wild up 4-1 after two but the Jackets rallied in the third only to fall short when Kevin Fiala ultimately put the game out of reach with his 17th goal of the season.  Alex Stalock made 24 saves in the win.  The rematch is tonight at 6 P-M from Nationwide Arena.