You are here: Home / Sports / Wild Collide With Avs in Colorado

The Minnesota Wild picked up a win and a defenseman in their stop
in Las Vegas.

The Wild beat the Vegas Golden Knights 4-2 on Monday and also
completed a trade for defenseman Brad Hunt. Hunt, who played in 13
games for Vegas this season, came over for a conditional
fifth-round pick in the 2019 draft.

Hunt joined the team in Denver on its last stop before the All-Star
break. Minnesota takes on Colorado in Denver on Wednesday night in
a battle of Central Division rivals.

The Wild’s win and the Avalanche’s 4-1 loss to Nashville on Monday
flipped the standings, putting Minnesota third in the division, a
point ahead of struggling Colorado.

The addition of Hunt will add depth to the blue line and bring back
a homegrown talent. Hunt, 30, played his college hockey at Bemidji
State in Minnesota and has been a journeyman in his six-year NHL
career. He posted career-highs in games (45), goals (three) and
assists (15) with the Golden Knights in 2017-18.

Hunt joins a team that has played well against good teams and
poorly against struggling teams. Anaheim ended a 12-game losing
streak against the Wild on Thursday, but Minnesota recently has
beaten Winnipeg and the Golden Knights.

Now, Minnesota (25-21-3) is looking right at Colorado with a chance
to pad its points lead before getting eight days off.

“We’ve got to treat it like a playoff game and go and play the same
way we have the last two games and enjoy it — enjoy the challenge
and the importance of the game,” Minnesota goalie Devan Dubnyk said
after Monday’s win.

The Avalanche (22-19-8) aren’t finding much joy lately. They are
3-9-2 in their past 14 games and have been inconsistent on offense.
They scored six goals in the second period against the Los Angeles
Kings on Saturday and then managed just one goal against Nashville.

Colorado has not won back-to-back games since Nov. 28 and has
fallen from the top of the Central to fighting for playoff
relevance. It doesn’t help that goalies tend to have good games
when playing the Avalanche.

Predators netminder Pekka Rinne was the difference Monday, stopping
35 shots, including a penalty shot early in the second period when
the game was scoreless.

Avalanche coach Jared Bednar said he was pleased with the effort.

“I have no problem with the way we played today,” Bednar said after
the game. “We made a couple mistakes, they capitalized. They made
lots of mistakes, too. We didn’t capitalize. To me, the difference
was Rinne.”

Dubnyk can do the same thing Monday and further add to Colorado’s
frustration. 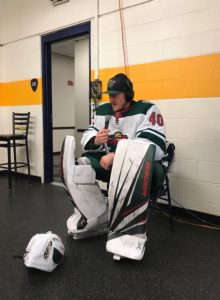 Wild goaltender Devan Dubnyk is expected to get the start on Wednesday night in Devner.

Back in the 2014 playoffs, the seventh-seeded Wild upset Colorado
in seven games, helping fuel an already simmering rivalry. And it
continues now, as the Wild can send the Avalanche to the All-Star
break and the five days after with a sour taste.