The Minnesota Wild have won twice in three games during stops at
Anaheim, San Jose and Arizona, and in the one defeat against the
Sharks on Thursday, the offense revved itself up in a 6-5 defeat,
scoring three goals in the third period to make things interesting.

Now comes a Tuesday road game against a Los Angeles Kings team the
Wild defeated 5-1 at home on Oct. 26. It is the largest margin of
victory in any of the Minnesota’s six wins this season.

Signs of life actually started before the current road trip, when
the Wild were fighting through a three-game losing streak. Two of
those defeats were in consecutive games and each by one goal to the
defending Stanley Cup champion St. Louis Blues. The second of those
came right before the road trip and was a 4-3 heartbreaker at home
in overtime.

Right winger Ryan Hartman scored the game-winning goal early in the
third period against Arizona as Minnesota pieced together three
consecutive goals to rally for the victory. 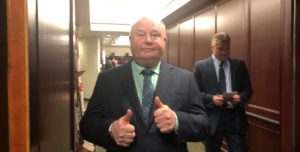 Wild head coach Bruce Boudreau will have his team in L.A. for a late puck drop.

“Well, we watch video on offense almost every day, and we seem to
have a certain thing that we do pretty well,” Wild coach Bruce
Boudreau said. “We just preach to keep doing it. If you look
(Saturday), I think we had 15 shots attempted in the first period
and 30 in the second. So, I mean, you shoot the puck and go to the
net, usually good things happen.”

The Kings used a similar shoot-often approach early in the season,
but it still wasn’t serving them well. They won just four times in
the opening month of the season and closed October on a four-game
losing streak.

November has been just as unfriendly. The Kings opened the month
with an overtime victory over Chicago, then went 0-2-1 on
just-concluded road trip through Canada, with stops at Toronto,
Ottawa and Montreal.

The Kings did have more shots on goal than the Maple Leafs on Nov.
5, but it was still an empty road trip aside from the one point in
an overtime defeat to the Senators.

The Kings were outscored 9-5 on the trip. so it wasn’t as if they
were dominated. But with one victory in their past eight games
(1-6-1), there are not a lot of positives. The coaching staff is
still trying to get a full game out of the team.

Los Angeles managed to win both of the final two periods against
the Canadiens on Saturday, but they still couldn’t make up the 3-0
deficit they faced after the first 20 minutes.