You are here: Home / Sports / Wild at Dallas tonight

Saturday night wasn’t kind to either the Minnesota Wild or the Dallas Stars, which makes the meeting between these Central Division rivals Monday night at American Airlines Center even more interesting.

Minnesota (9-7-1) had a two-goal lead after 40 minutes against the Colorado Avalanche at XCel Energy Center. However, the Wild coughed up that edge and ended up losing 3-2.

“I need more from a lot of guys,” Wild first-year coach Bruce Boudreau told the media postgame. “When was the last time any of us had a multi-point game? You can’t win every night in this league 1-0, 2-1.” 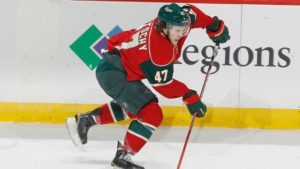 The Wild was without forward Zach Parise (illness) on Saturday. Parise, who also missed six games with a foot injury earlier this season, practiced Sunday in the Twin Cities and appears likely to play against Dallas, although the club recalled forward Christoph Bertschy from Iowa of the American Hockey League

The Stars (7-7-5) allowed the first four goals to Edmonton on Saturday night in Dallas and ended up losing 5-2 as Oilers phenom Connor McDavid delivered a hat trick.

Dallas will conclude its four-game homestand on Monday and the first three games, in which the Stars are 1-1-1, have been a mixed bag.

On Tuesday, Dallas lost 2-1 to New Jersey in overtime and followed that with a 3-2 win against Colorado on Thursday, a game where the Stars nearly blew a 3-0 lead.

Against Edmonton, veteran forward Patrick Eaves scored, giving him goals in a career-best five consecutive games. Eaves currently is tied with Dallas captain Jamie Benn for second on the Stars with 15 points.

“We just have to come together as a team more, play for each other and keep each other accountable,” Benn said after the loss to Edmonton. “I don’t think we’re playing as a team right now. We really need to do better, and that starts with myself.”

Veteran forward Patrick Sharp saw his first action in nearly a month. Sharp, fifth on the Stars with 55 points last season, was up and down in his first game since Oct. 20 against Los Angeles, when he sustained a concussion.

“I thought that there were times he really skated well,” Stars coach Lindy Ruff said of Sharp’s performance against the Oilers. “I just think it’s going to be a little bit of time. I saw him in the training room in between periods so it’s going to be a bit up-and-down and that’s why I kind of mixed the lines and tried to find who was going the best.”

Dallas, which is 4-3-2 at home, did not practice on Sunday due to a mandatory day off.

Last spring, the Stars drew the Wild in the opening round of the playoffs and eliminated them in six games, Dallas’ first playoff series win since 2008.

However, Minnesota has a new coach in Boudreau and on Oct. 29, the Wild blitzed Dallas 4-0 in St. Paul.

Both teams made considerable changes from the squads which faced one another in the playoffs. Dallas’ biggest changes came at the blue line as the Stars jettisoned three of their most experienced defensemen, trading native Minnesotan Alex Goligoski while letting Jason Demers and Kris Russell leave in free agency.

Dallas added veteran defenseman Dan Hamhuis, but otherwise the plan has been to give what is a pretty young defensive corps the chance to step up, a strategy which, like the Stars’ season thus far, has produced results on both sides of the ledger.

The Stars have allowed 64 goals, second-most in the NHL. Only the Philadelphia Flyers, who lead the league with 67 goals allowed, have conceded more goals than Dallas.

And that’s a number Ruff knows must improve.

“We’ve got some young defensemen who I think, when the going gets tough, their vision narrows,” Ruff said after Saturday’s loss. “That will come with more experience. That’s hard right now. We made some good plays and had some better options (against Edmonton), which was encouraging. There was still some plays that we just left out there.”

That defensive depth will be put to the test again. On Sunday afternoon, Dallas placed veteran defenseman Johnny Oduya on injured reserve after he sustained a lower-body injury on Saturday.

Dallas recalled Julius Honka and Esa Lindell from AHL Texas. Honka, the 14th pick in the 2014 NHL draft, figures to make his long-awaited NHL debut while Lindell made his debut last season and appeared in 10 games for Dallas before being sent to the AHL last Thursday.