You are here: Home / Sports / Wild double up Detroit 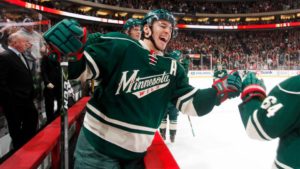 SAINT PAUL, Minn. — Minnesota got a pair of goals by Zach Parise in the third period to overpower a tired Detroit team.

The Wild also got goals from Mikael Granlund, Nino Niederreiter, Charlie Coyle and Christian Folin to improve to 4-0-1 in their past five games. Devan Dubnyk had 30 saves for Minnesota, which took a two-goal lead four times in the game only to see Detroit continue to answer until running out of gas late.

The Red Wings played in Columbus less than 24 hours earlier and trailed by two after the first period, but got goals from Anthony Mantha, Henrik Zetterberg and Andreas Athanasiou to stay in the game. Jared Coreau had 23 saves for Detroit, which has lost four in a row.