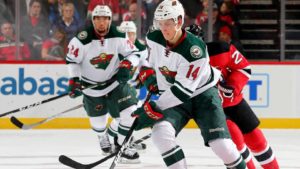 New Jersey is bringing out the best in Taylor Hall, especially when it comes to game-winning goals.

Hall scored 29 seconds into overtime and the Devils won for the second time in two home games, rallying to beat the Minnesota Wild 2-1 on Saturday night.

The goal-starved Devils have had each of their five games decided by goal, and Hall has been the difference in their two wins. He had both goals in a 2-1 win over Anaheim this week and combined with former junior hockey teammate Adam Henrique for the winner that ended the Wild’s three-game winning streak.

”It’s fun to score any time, but certainly at home in overtime on a Saturday night where we have struggled to score,” said Hall, who was acquired in a major trade with Edmonton in the offseason.

Hall carried the puck into the Wild zone and dropped a pass after crisscrossing with Henrique. He then went to the net and took the return pass and beat Devan Dubnyk between the pads.

”It was a good play there,” Henrique said. ”It just opened up, a little crisscross, and then they kind of bit, both guys over. Halls was open so I just tried to get the puck to him and he made a great play to end it.”

Dubnyk, who made 30 saves, said the play seemed to come out of nowhere.

”They weren’t flying or anything,” he said. He’s (Hall) a dynamic player. I was able to get over there on him. He likes to rip it, but he had his head up and saw that I was on my feet and moving out at him and he snapped it real quick.”

After being stoned by Dubnyk on their first 26 shots, PA Parenteau tied it with 8:04 left in regulation. The right wing took a cross-ice pass from Mike Cammalleri and beat Dubnyk with a shot from above the right circle for his second goal of the season.

Cory Schneider made 28 saves for the Devils.

Joel Eriksson Ek scored for Minnesota in his NHL debut. After helping force a turnover at the Devils’ blue line, the 19-year-old Swede – Minnesota’s first-round draft pick in 2015 – rushed to the net and arrived just in time to poke the rebound of a Jason Zucker shot over Schneider a minute into the second period.

”It felt like the puck was going in in slow motion,” Erikkson Ek said.

Dubnyk was the difference for much of the game. He made a pad save on Beau Bennett in the second period while flat on his back.

Schneider stopped a breakaway by Eric Staal early in the second period with Minnesota ahead 1-0. The goaltender also stopped Ryan Suter and Zach Parise in close with 1:40 left in regulation.

NOTES: The Devils dedicated a statue outside Prudential Arena to longtime goaltender Martin Brodeur before the game. … With Erik Haula hurt, Zac Dalpe moved up to the third line for the Wild and Eriksson Ek centered the fourth line with Zucker and Teemu Pulkkinen on the wings. He is the seventh Wild player to score in his debut. … . It’s pronounced JUHL AIR-ihk-suhn EHK. … Minnesota D Nate Prosser played for the first time this season with D Jared Spurgeon sidelined. … Devils F Reid Boucher and Jacob Josefson were healthy scratches. … After missing the first four games with an illness, F Sergey Kalinin was in the Devils’ lineup. … New Jersey sent F Miles Wood to Albany (AHL). … The Devils and Wild will play again on Jan. 17 in St. Paul.

Wild: Cross the Hudson River and go to Brooklyn to play the Islanders Sunday night.