You are here: Home / Sports / Wild and Dubnyk pitch another shutout, beat Dallas 4-0 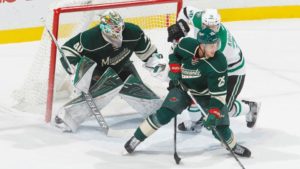 Devan Dubnyk was on edge as the final 35 seconds ticked off.

That seems odd for someone who has been as cool as can be for three straight games.

Dubnyk stopped 29 shots for his third straight shutout and 22nd of his career as the Minnesota Wild beat the Dallas Stars 4-0 on Saturday night.

”Usually when it gets to a 4-0 game you’re happy with the win and if the shutout happens, great. But you don’t really get nervous,” he said. ”That was probably the first time I started to get a little nervous toward the end of a 4-0 game. But it’s fun.”

Dubnyk didn’t have to make any spectacular saves in establishing a new personal best scoreless stretch of 180 minutes. He’s stopped 94 straight shots. The last goal he allowed was in overtime last Saturday.

”I don’t know if he can do it for 73 more games, but right now he’s doing very well,” said Wild coach Bruce Boudreau.

Dallas, which has just four goals in its last four games, hit the post twice.

”We know what we do well when we’re playing well,” said Jason Spezza, who returned after missing two games. ”But this year we’ve had not the results we want, so we have to get back to finding our game and be a little more consistent with it.”

A key to the Wild’s early-season success has been offensive contributions from all players. Eighteen players have accounted for Minnesota’s 32 goals and a league-best 18 now have points.

Granlund added his name to that goal list to give Minnesota a 1-0 lead in the first with the Wild’s first short-handed goal of the season.

Off a turnover by Jason Spezza, Mikko Koivu deked John Klingberg with a toe drag in the Dallas zone before centering to Granlund, who tucked the puck behind Kari Lehtonen. Granlund was the only Wild player to appear in all the team’s previous eight games without scoring.

”We got to be better on the power play and not give up that short-handed goal, and try to at least get momentum if we’re not going to score,” said captain Jamie Benn.

Dallas had a 13-1 advantage in second-period shots.

Niederreiter gave the Wild a 2-0 lead early in the third with a wrist shot from the left circle, before Staal and Graovac scored less than three minutes apart. Graovac’s goal was the first of his career.

”I know I had a lot of family watching that game,” said Graovac, called up from Iowa of the AHL earlier in the day. ”It’s not just me scoring that goal. It’s my aunts, uncles, grandmother, my parents back home. It’s just something very special for all of us that we can all enjoy.”

Graovac was sent back down to Iowa after the game.

Minnesota played its first of what could be many games without left wing Zach Parise and defenseman Marco Scandella. The team announced before the game that both are listed as week-to-week with lower-body injuries sustained Thursday in Buffalo.

Stars: At Columbus on Tuesday night to conclude a three-game trip.