(St. Paul, MN)  —  Devan Dubnyk recorded his first shutout of the season as Minnesota blanked Calgary 3-0.  Dubnyk made 22 saves in his third game, and second, start since missing extended time for a family issue. He earned wins in both of his starts since his return. It’s the 32nd shutout of his N-H-L career.

Joel Eriksson Ek returned from an upper body injury his third goal of the season proved to be the game winner, the fourth of his N-H-L career.  Luke Kunin and Eric Staal also scored in the win. 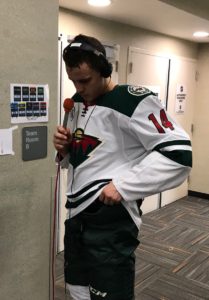 Joel Eriksson Ek scored in his first game back from injury in Monday’s 3-0 win over the Flames. Wild are at Colorado on Friday.

The Wild are now 10-2-3 at home this season and have points in 16 of the last 20 games overall.  The N-H-L is off for the holiday break meaning the Wild won’t return to action until Friday night in Colorado.

Right-hander JT Brubaker will make his major league starting debut on Thursday afternoon and try to help the host Pittsburgh Pirates snap a seven-game losing streak against the red-hot Minnesota Twins. The 6-foot-3, 185-pound Brubaker (0-0, 0.00 ERA) is replacing the injured Mitch Keller (oblique) in the rotation and earned the starting nod after two […]