You are here: Home / Sports / Wild get late (lucky) bounce in win over Boston 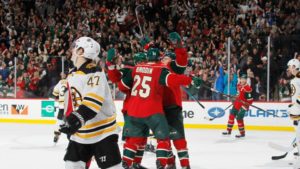 A bounce went the right way at a key time for Mikael Granlund and the Minnesota Wild.

Granlund took a pass from Jonas Brodin circled below the end line and came out to the right of Tuukka Rask. His centering pass went off Adam McQuaid then off Rask and into the Boston net.

”That’s why I always pass,” joked Granlund, who missed an open net in the second period.

Dubnyk has had to carry the Wild lately as Minnesota’s offense has mustered just 10 goals in its past seven games, yet won three. He has allowed nine goals in his last nine games, stopping 274 of 283 shots in that span to account for a .965 save percentage. For the season, his goals-against average (1.48) and save percentage (.952) are league bests.

”It’s not my job to score. It’s my job to work with the guys and defend. I have zero complaints with how the guys have been defending for me and playing,” Dubnyk said. ”I got no question in here that these guys can put the puck in the net. Sometimes it takes something like that to turn it around.”

Minnesota has allowed an NHL-low 29 total goals in 16 games this season, including 10 in its last nine games, dating back to a 5-0 shutout Oct. 25 in Boston.

Dubnyk kept the game scoreless 6 minutes into the third coming out of the crease and diving to poke the puck away from Matt Beleskey, who was in alone after a turnover by Matt Dumba.

His best save came late in the second, getting his glove up quick to stifle Jason Pominville, who was alone in front and had a second to move the puck to his forehand.

”He’s been unbelievable, carrying us and bailing us out when we made mistakes,” David Backes said. ”We need to find a way to beat the other goaltender.”

Boston has scored four goals in its last three games.

An undisclosed injury has kept Bruins leading-scorer David Pastrnak, who has 10 goals and 14 points in 14 games, out of the past two practices. Coach Claude Julien said the right wing is day to day. Riley Nash played on the top line with Brad Marchand and Patrice Bergeron.

After an evenly played opening period featuring stellar stops on both ends, and Minnesota controlling the first 14 minutes of the second, Boston thought it took a 1-0 lead when a shot from Torrey Krug deflected off the skate of Backes and behind Dubnyk with 5:30 to play in the frame. However, after a lengthy video review it was ruled the Bruins were offside entering the zone.

”Pardon my language but the (bad) bounces were 1-1 and ours was just an offside and theirs was a goal,” Rask said. ”But after two periods when it’s 0-0 you feel like it’s gonna be some kind of breakdown or lucky bounce and that’s what happened.”

NOTES: Boston was scoreless on two power plays and is 4 for 60 all-time against the Wild. … Minnesota assigned C Joel Eriksson Elk to Farjesta BK in the Swedish Elite League. Eriksson Ek has two goals and three assists in nine games and would have had the first year of his three-year entry-level contract kick in if he played a 10th game. … Bruins D Kevan Miller, who began practicing with the team Tuesday, did not play. He had surgery Oct. 11 to repair a fracture in his left hand.

Wild: Host Colorado on Saturday to conclude a three-game homestand