You are here: Home / Sports / Wild get overtime a Sunday night win in Ottawa 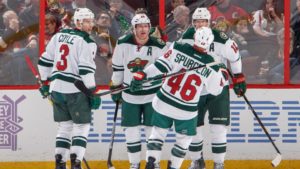 For a team playing its third game in four nights, the Minnesota Wild looked plenty fresh on Sunday night – even in overtime.

The Wild were coming off a 3-2 loss to Philadelphia on Saturday after beating Pittsburgh on Thursday.

”It’s not the end of the world to play back-to-backs, and I thought we held on and did a good job,” Wild coach Bruce Boudreau said.

”We’re not a team that wants to get behind 3-0, so getting those three kills and getting out of the first period with a lead was really important for us I’d say,” Boudreau said.

Craig Anderson made 40 saves and was again solid for the Senators, who got a goal from Kyle Turris 5:06 into the third period. Ottawa has 11 goals over its last eight games and are 1 for 24 on the power play.

”I love the way we’re playing, we’re giving ourselves a chance to win by being there at the end,” Anderson said. ”The positive out of not scoring right now is that even though guys might be showing some frustration, they’re still doing their jobs on the defensive side of the puck which is allowing us to get points and give ourselves an opportunity to be in each game.”

Despite their hectic schedule of late, the Wild controlled much of the action with Ottawa looking disorganized for most of the night.

”We had all kinds of scoring chances, but we just can’t find the back of the net,” Senators coach Guy Boucher said. ”It’s a matter of creating the same chances and then having some go in and you’re able to relax and not grip the stick so tight.”

Turris finally got Ottawa on the board when he beat Kuemper far stick-side with a wrist shot.

Boucher’s decision to dress seven defenseman worked out when Marc Methot left after the first period with a lower-body injury and did not return. Boucher said after the game that Ottawa knew Methot was dealing with an issue, which is why the Senators used an extra defender.

Suter scored late in the first and Ottawa continued to struggle in the second, leaving Anderson to keep the team in the game. He made huge saves on Nino Niederreiter and Erik Staal to keep it 1-0.

The Senators had four power-play opportunities and struggled to create offense, a common refrain for the team as of late.

The Wild made the Senators’ power play look even worse when they scored short-handed. Staal got off a shot and Suter was there for the rebound.