You are here: Home / Sports / Wild get road win against defending champs 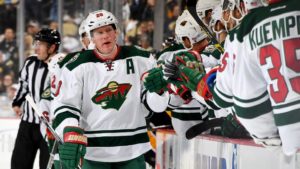 The Minnesota Wild, after a long layoff, were admittedly a little rusty early on the road against the defending Stanley Cup champion Pittsburgh Penguins.

But Eric Staal provided the spark offensively to allow the defensive-minded Wild to settle down.

Staal had a three-point night, including the game-winning goal in the third period, as the Wild defeated the Penguins 4-2 on Thursday night.

”I’ve scored a few against (Pittsburgh) and I’ve felt the pain against them in the playoffs a few years, too,” Staal said. ”It was nice to get the win tonight.”

Staal has spent 11 of his 12 NHL seasons in the Eastern Conference, and last season, he played for the Rangers, a team the Penguins eliminated in the playoffs en route to the franchise’s fourth Stanley Cup.

Still, Staal has experienced success against Pittsburgh and the trend continued Thursday. Staal scored his fifth of the season and added two assists, giving him 51 points in 50 career games against the Penguins.

Charlie Coyle scored his fourth of the season on the power play, while Nino Niederreiter added his third and Jared Spurgeon his second into an empty net for the Wild, who won for the fourth time in six games.

Devan Dubnyk, who made 39 saves, allowed fewer than three goals for the eighth straight game, which includes a streak of three straight shutouts. The Wild defeated the Penguins for the first time in five games, including four straight in Pittsburgh. 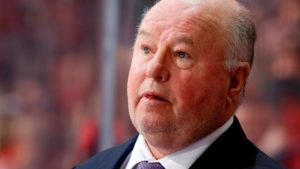 ”This was a great challenge going against the Stanley Cup champions who hadn’t lost in regulation at home,” Wild coach Bruce Boudreau said. ”I think they were up for it.”

Sidney Crosby and Patric Hornqvist both scored power-play goals for Pittsburgh, which lost in regulation for the first time in eight games. It was also Pittsburgh’s first regulation home loss this season.

Crosby has nine goals and 11 points in eight games since returning from a concussion that sidelined him for the first six games of the season. Crosby opened the season with a six-game point streak. Phil Kessel had two assists for Pittsburgh, which allowed a season-high 43 shots.

Marc-Andre Fleury made his first start in a week on Thursday and stopped 40 shots. He backed up Matt Murray the previous two games.

”Especially in their own zone, (the Wild) are really good at having different layers,” Crosby said. ”They collapse five guys pretty close to the puck, so you have to find ways to win your battles and play in their end a little bit more and we weren’t able to do that.”

The Wild, playing their first game since a one-goal loss against Colorado on Saturday, started slow as a giveaway led to a chance for Crosby alone in front of Dubnyk, while Evgeni Malkin later hit the post during a 2-on-1 with Kessel.

”(Crosby) is not the guy you want to see standing in front of you that early in the game,” Dubnyk said. ”Anytime Sid wants to backhand it into my chest I’m fine with that because his backhand is as hard as many forehands. They came out real hard and sometimes you need a couple bounces to get going.”

Staal was the catalyst, with a second assist on Coyle’s power-play goal and then the primary helper on Niederreiter’s tying goal in the second period.

Staal put Minnesota in front for good early in the third period. Coyle put a shot on net following a Penguins’ turnover behind the goal and Staal backhanded the rebound behind Fleury.

”The first five minutes, I think we were a little nervous and we started throwing the puck away, and I thought `Uh-oh, we’re going to get killed,”’ Boudreau said. ”Once we settled down, a lot of good things happened and I thought we competed really hard.”