You are here: Home / Sports / Wild Home Against Senators

The Ottawa Senators have had a scoring outage over the last two
games, and Minnesota might not be the best place to find full power.

The Senators travel to the “State of Hockey” to face the Minnesota
Wild in St. Paul on Friday, a game which will conclude the clubs’
two-game series this season.

Ottawa led in the third period but dropped a 2-1 decision to the
visiting Boston Bruin on Wednesday night, adding on to what has
been an anemic week of scoring for the Atlantic Division team.

The Senators fell 1-0 in Columbus on Monday, losing on a deflection
from the high slot that changed direction and veered to the right
of goaltender Craig Anderson.

But Wednesday’s loss felt worse than the shutout.

Ottawa held a 1-0 lead after Thomas Chabot scored an impressive
goal off a feed from Chris Tierney. The defenseman skated in and
popped a shot over Boston standout Tuukka Rask less than a minute
into the third period, but that was it for the offense.

Boston’s veteran leaders took over from there, as Brad Marchand and
Zdeno Chara potted goals 3 1/2 minutes apart to give the streaking
Bruins their fifth straight win.

“I thought we worked really hard,” Ottawa coach D.J. Smith told
reporters. “We made a couple of mistakes that ended up in our net.
Some real good players of theirs scored.

“We just haven’t found a way to score on our chances, but I don’t
know if we can play much better through (the first) two periods.
…They’re a good hockey team for a reason.”

Smith announced that Anders Nilsson, Wednesday’s loser in goal,
will again be between the pipes against the Wild.

Offensive struggles were story of Ottawa’s first game against
Minnesota, as well, a 2-0 loss at home on Oct. 14. 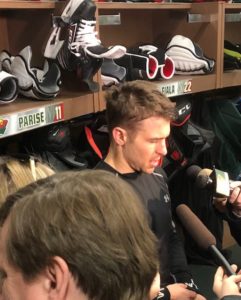 Wild winger Zach Parise scored against the Sens in a 2-0 win last month in Ottawa. Friday the teams meet at 3 p.m. at Xcel Energy Center.

Minnesota rookie backstop Kaapo Kahkonen stole the show Tuesday
night in New Jersey in the Wild’s 3-2 win over the Devils.

The Finnish netminder made his NHL debut a stellar one, recording
32 saves as Minnesota extended its point streak to seven games

“Obviously it’s just one game, but I feel the game was pretty
simple, we did the right plays and put the puck deep and defended
the middle,” said Kahkonen, 23. “They got their chances from the
outside, but we did a very good job, and that made my job a lot
easier.”

He was called up on an emergency basis from the team’s AHL Iowa
affiliate after No. 1 goalie Devan Dubnyk went home for personal
reasons.

Kahkonen made all 10 saves in the third period to help lock down
the win and move Minnesota to 4-0-3 in its last seven games.

Defenseman Ryan Suter notched a goal and an assist, pushing him to
seven points (goal, six assists) in his past five games.