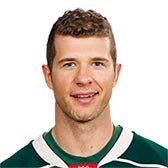 Look no further than Jason Pominville for evidence that things are going better offensively for the Minnesota Wild under new coach Bruce Boudreau.

Heading into his third game of the season Thursday night vs. the Toronto Maple Leafs, Pominville already has his first goal notched. Last season, that’s a feat that took more than 20 games as Pominville slogged through one of the worst offensive seasons of his career.

“I felt good,” Pominville said after scoring in Minnesota’s 6-3 home win over the Los Angeles Kings on Tuesday, which lifted them to a 2-1-0 record. “I’ve been shooting good in practice. I’ve missed a couple, actually one in the first game, one in the second but yeah, it’s nice to be able to get one early and hopefully get going in the right direction. I don’t have to worry about it now and just go out and play.”

That’s the freedom Boudreau has given the Wild, encouraging them to just play, move the puck, shoot the puck and have fun. After a rough season-opening loss in St. Louis, the Wild have put together back-to-back home wins over the Winnipeg Jets and the Kings, and now are prepping for the arrival of Maple Leafs rookie Auston Matthews and the accompanying circus.

After scoring four times in his NHL debut, Matthews — the Arizona kid picked first overall by the Maple Leafs in June — has quieted down offensively. His assist on Wednesday night in Toronto’s 5-4 overtime loss to the Winnipeg Jets was his first point since the season-opener. That’s a fact not lost on opposing fans, who have quickly made Matthews the object of their razzing. That was the case Wednesday, when the Maple Leafs (1-0-2) lost in Winnipeg after leading 4-0. When Jets rookie Patrik Laine, the second overall pick behind Matthews last summer, completed his first career hat trick in overtime, just seconds after Matthews had been stopped on a breakaway, it prompted a chant of “Laine’s Better” from the Winnipeg audience.

“As players, you don’t really think about it much,” Matthews said on Wednesday of the rivalry with Laine. “It’s not really a comparison, it’s your team against theirs. You obviously want to better your team in any way possible, whatever it takes to win.”

The Wild have owned their games with the Maple Leafs recently, winning five straight in the series, including both meetings last season. But four of those five Minnesota wins have been by one goal, and the all-time series is knotted 8-8-0.

Although it’s a non-conference game, and one of only two meetings between the Maple Leafs and Wild this season, it could have some special meaning for Boudreau. He’s a Toronto native who played pro hockey both in Minnesota of the WHA and in 134 games with the Maple Leafs over the course of six seasons. Two of Boudreau’s assistant coaches, John Anderson and Darby Hendrickson, are also former Maple Leafs.