(St. Paul, MN)  —  The Minnesota Wild continued their recent hot streak with a 3-2 win over the Colorado Avalanche.  Jason Zucker scored the eventual winner midway through the third period as the Wild won their second consecutive game, improved to 3-0-1 in their last four games and improved to 5-1-2 at Xcel Energy Center.  Alex Stalock made 25 saves for the victory as the Wild announced before the game that Devan Dubnyk will be out for the time being dealing with a family issue. 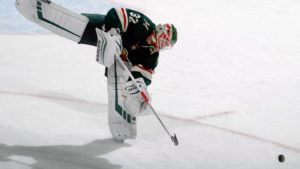 Wild goaltender Alex Stalock made 25 saves to help beat the Avalanche. Stalock has five of the Wild’s nine wins this season.

Mats Zuccarello and Jordan Greenway scored the other Wild goals while Colorado defenseman Cale Makar scored both Avalanche goals.  Wild start a three game trip out east on Saturday when they travel to Boston for a 6 P-M face off against the Bruins.