The Anaheim Ducks are still searching for a way out of their
month-long losing streak. They’ll get their next chance Thursday
night in St. Paul against the Minnesota Wild.

Anaheim has lost a franchise-record 12 in a row, getting outscored
21-2 after the second period in those games. The Ducks haven’t won
since Dec. 17 at the Pittsburgh Penguins — exactly one month ago
Thursday.

And they received more bad news on Wednesday.

Jakob Silfverberg, who has a team-leading 12 goals, departed in the
first period of a 3-1 loss at the Detroit Red Wings on Tuesday
night with a lower-body injury. He didn’t practice Wednesday and is
considered day-to-day.

Veteran forward Ryan Kesler joined Silfverberg in the locker room
the following period with his own lower-body injury. Kesler was
returned to Anaheim on Wednesday for further evaluation.

To prepare for the veterans’ absences, the Ducks recalled rookie
forwards Max Jones and Troy Terry from the San Diego Gulls of the
American Hockey League. Terry came into Wednesday tied for 11th in
the AHL with 37 points (16 goals, 21 assists). Jones has also
played 32 games with the Gulls and has produced 24 points (12
goals, 12 assists).

The Ducks (19-19-9, 47 points) have been shut out twice during the
losing streak, but have also held a lead in eight games, three
times by multiple goals.

Anaheim led 1-0 to start the third period in Detroit on Tuesday,
but then surrendered three consecutive goals.

“It just feels like we’re holding our sticks a little too hard,”
Anaheim defenseman Hampus Lindholm told reporters after the loss in
Detroit. “When you come to the third period, when the other team is
on us, we kind of fall together. … In this league, you have to be
on your toes the whole time. You have to go after teams because
every team has good scorers. If you play in your zone a lot,
they’re going to score at some point.”

Nonetheless, the Ducks are still just two points out of the final
wild-card spot in the Western Conference. One of the teams holding
that spot? The Wild.

Minnesota (23-20-3, 49 points) rebounded from back-to-back losses
to the Red Wings and Philadelphia Flyers, two of the bottom teams
in the Eastern Conference, with a 3-2 shootout victory against the
visiting Los Angeles Kings on Tuesday night. 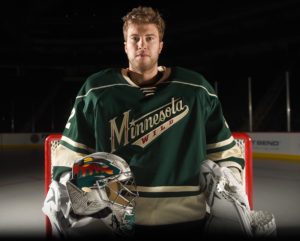 Goalie Alex Stalock was one of the stars in Tuesday’s win over Los Angeles. The Wild look for a second straight win Thursday night against the Ducks.

Minnesota forward Jason Zucker told reporters after the win against
that the Wild must take advantage of their home ice, where they’re
12-8-3 this season.

Minnesota beat the Ducks 5-1 on Nov. 9. Zucker and Mikael Granlund
each scored three points in the win. Zucker has six goals and six
assists in 15 career games against Anaheim.

The Ducks traded veteran forward Andrew Cogliano to the Dallas
Stars on Monday in exchange for forward Devin Shore. Anaheim
General Manager Bob Murray said he hoped Shore would provide more
creativity to an offense that ranks second-to-last in the NHL in
goals per game (2.34).

Cogliano was one of the most well-liked players in Anaheim, but the
31-year-old only had three goals and eight assists in 46 games.

The move didn’t pay any dividends against Detroit, however, as the
Ducks were held to two goals or fewer for the ninth time during the
losing streak.

“It’s been some tough games,” Lindholm said. “We need to figure out
what we can do to get back on the right end.”