You are here: Home / Sports / Wild lose at Colorado 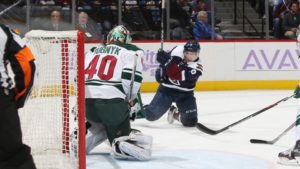 Gabriel Landeskog will think twice about engaging in fights with opposing goaltenders.

The reason is painfully simple: ”That blocker hurts … and he’s got a mask to protect himself,” the Colorado captain cracked.

Soon after exchanging some shoves with Minnesota goalie Devan Dubnyk, Landeskog got the ultimate retaliation – the winning goal. Landeskog scored with 9:37 remaining, Calvin Pickard stopped 32 shots for his second NHL shutout and the Avalanche beat the Minnesota Wild 1-0 on Saturday.

”It didn’t come easy for us, that’s for sure,” Avalanche coach Jared Bednar said.

Nothing seems to these days for the Avalanche, who won for the second time in six games.

Landeskog’s power-play goal ended a Colorado scoring drought that lasted more than 164 minutes. He found the net on a pass from Matt Duchene and then hopped into the arms of Nathan MacKinnon in excitement.

Earlier in the third period, Landeskog got into a brief scuffle with Dubnyk after agitating the goalie in front of the net. That seemed to swing the momentum into Colorado’s favor. A jarring hit by John Mitchell near the blue line didn’t hurt, either.

”Those two instances energized our crowd, which energized us,” Bednar said. ”You knew they were going to have a push.”

The Wild did at that.

With Dubnyk on the bench for an extra skater, Charlie Coyle knocked in a shot with 48.9 seconds remaining, but it was disallowed because of goaltender interference. The officials ruled that  Minnesota forward Eric Staal pushed Avalanche defenseman Erik Johnson into Pickard.

How good of call that was depends on the side that’s asked.

”The goalie was in a terrible position,” Staal said. ”We made a huge play on it. They gave them the benefit of the doubt on it.”

Pickard had a different take.

”You could see their guy kind of pushed E.J. into me,” Pickard explained. ”I think that’s the criteria for goalie interference – doesn’t let me do my job. I couldn’t slide over there.”

Pickard’s most opportunistic save of the night was with 5 minutes remaining, when he closed his pads at the last second to save a shot from trickling in.

”It was a big save for me,” said Pickard, whose other shutout was Jan. 14 against New Jersey. ”We had a really good game all the way through.”

Dubnyk mixed it up Landeskog after the two were jostling in front of the net early in the third period. Dubnyk put Landeskog in a headlock as players raced over to separate them. Dubnyk was called for slashing and roughing while Landeskog drew only a roughing penalty. The Avalanche didn’t score on the power play chance.

”I gave him a whack and he gave me a whack and we gave each other a few shots and somehow I ended up with one,” said Dubnyk of drawing the extra penalty. ”That seemed to be how they did the third period there. Not a big deal. It’s always a tough game when we play these guys. It’s part of the game. There’s emotion in the game.”

The Wild were called for two penalties on one play early in the second period. First, Ryan Suter slashed Blake Comeau with the Colorado forward on a breakaway. As Comeau went into the boards, Matt Dumba was whistled for a cross-checking penalty. Colorado a two-man advantage for a full two minutes, but never challenged Dubnyk.

”I thought there were some pretty cheesy penalties out there,” Boudreau said.

NOTES: Minnesota LW Zach Parise and D Marco Scandella both missed a third game with lower-body injuries. … Avalanche RW Jarome Iginla played in his 1,484th NHL game to tie Rod Brind’Amour for 19th on the career list. … Mikko Rantanen took a puck in the face during the first period and briefly went into the locker room for treatment. He had the second assist on Landeskog’s goal. … Mitchell cleared waivers Saturday and was back on the fourth line.