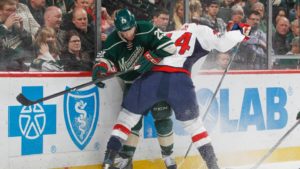 SAINT PAUL, Minn. — T.J. Oshie of Warroad scored his second goal of the game 1:52 into overtime to support Alex Ovechkin’s three goals as Washington won its fifth game in a row.

Ovechkin tallied the 17th hat trick of his career and second this season, with all three goals coming on the power play. Braden Holtby had 26 saves in goal for the Capitals. Marcus Johansson added four assists.