You are here: Home / Sports / Wild Return Home Against Coyotes

The Arizona Coyotes made history by defeating the Capitals in
Washington on Monday night and the Blues in St. Louis the next
evening.

Two wins in two nights — both on the road — against the previous
two teams to hoist the Stanley Cup. An unprecedented achievement.

There had been 69 occurrences when a team had faced the past two
champs in back-to-back road games in league history, but Arizona
became the first franchise to emerge with two victories.

Arizona continues its three-game road trip with a stop in Minnesota
against the Wild on Thursday.

Completing the second half of their historic double didn’t seem
likely for the Coyotes.

After a 4-3 shootout win in Washington, they ran into travel
problems from the nation’s capital and didn’t get to their St.
Louis hotel until shortly before 4 a.m. on Tuesday.

But Conor Garland scored in regulation to tie it at 2, and he and
Nick Schmaltz tallied in the shootout to earn the two points.

“I’m proud of the guys,” coach Rick Tocchet said. “The
circumstances, the tough schedule, not much sleep, and that’s a
hell of a hockey club over there. A little bit of rope-a-dope, and
it was nice to win this game.”

Garland, 23, has been a driving force for Arizona by leading the
team with eight goals in 19 games.

Minnesota hasn’t had the kind of success the Coyotes have
experienced.

Tuesday night’s 3-1 loss to the Kings in Los Angeles left both
teams at 6-11-1 — the worst records in the NHL. 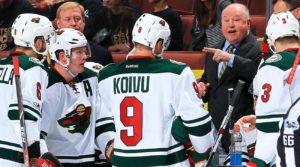 While the Wild have struggled this season they’re 3-1-1 on home ice. They return to Xcel Energy Center tonight against Arizona.

The Wild lost their first four games to open the season, putting
the club in an uphill climb that it has never been fully able to
mount through 18 games.

Thursday’s game with Arizona is a rematch from Saturday’s match in
the desert. The Wild won that one, 4-3, but they didn’t do it in
conventional fashion.

They watched the Coyotes race out to a 3-1 lead but rallied to tie
it behind goals from Kevin Fiala and Matt Dumba, and Ryan Hartman
scored early in the third to complete the rally against Arizona and
Kuemper.

Minnesota’s four tallies marked the first time an opponent had put
up a four-spot against Kuemper since the Chicago Blackhawks notched
a 7-1 win over the Coyotes on March 11.

Kuemper’s streak of yielding fewer than four goals had reached 23
games, all of them starts.

“It’s great that we’re playing OK, but when you dig yourself a hole
like we’ve done, you can’t win one, lose one the rest of the way,”
said Wild coach Bruce Boudreau. “You got to put a little run
together, and so far we haven’t done that.”

Dumba has recorded goals in two consecutive games for Minnesota,
which went 2-2-0 on its road trip.