You are here: Home / Sports / Wild Return To Practice

(St. Paul, MN) — The Wild finished their three game trip through Southern California on Sunday in Anaheim with an overtime win over the Ducks. Kevin Fiala scored twice in the win including the winner. In all the Wild won two of three on the trip. The Wild took the next two days off though from team activities but will return to the ice this morning at their practice facility in St. Paul. The team will return to some media restrictions that have been implemented by a number of pro leagues in North America including the N-H-L. The biggest new edict is that for the time being nobody will be allowed in the dressing room other than team personnel. The goal is to limit exposure to the coronavirus that’s sweeping the globe. 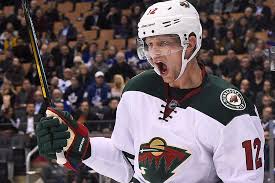 Center Eric Staal will return to practice on Wednesday after missing the three game trip through California.

The team plans to get center Eric Staal back for practice on Wednesday however and get him back in the line up starting Thursday against Vegas. Staal missed the three game trip through California because of a death in the family. To make room on the roster, Gerald Mayhew was sent back to the Iowa Wild. Mayhew had zero points in six games with the big club. He’ll return to Des Moines where he leads the A-H-L with 39 goals. The Wild host the Golden Knights on Thursday night at Xcel Energy Center at 7 p.m.